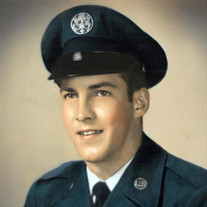 Jacques Spencer Arnoult, age 89, of Bush passed away on Wednesday morning, June 23, 2021 at Lakeview Regional Medical Center. He was born on February 12, 1932 in New Orleans, Louisiana to George P. “ Jack” Arnoult and Irene Munsch Arnoult. He is the loving father of Jody Arnoult Spaulding and husband Jim, Jacques Stephen Arnoult and his wife Tyia, and Mark Christopher Arnoult and wife Kim. He is the proud Grandfather of Megan, Morgan, James, Scott, Jacques, Jr., and Brennan, as well as Great-grandfather to Isabella, Spencer, Kaylee, Luke, Bohdi, and Damon. He is also survived by his brother Jay Arnoult and sister Jean Gaul. Jacques is preceded in death by his adoring wife of 53 years Mazie Linell Arnoult, his parents George P. “Jack” and Irene Arnoult, grandson Spencer Arnoult, and his brothers John Paul and Jude Arnoult. A native of New Orleans, he became a resident of Bush in 1999. Jacques joined the United States Air Force after graduating from Ridgewood Prep High School. He proudly served in the Korean Conflict as an Electronics Technician, and he was selected and played for the United States Air Force Football team. After being honorably discharged, he began his long career as a highly skilled Marine Electrician for many years, until he retired in 1997. He and his wife Mazie moved from Marrero to the Northshore in 1999, and began to enjoy his retirement. Jacques became a devoted parishioner of St. Jane de Chantal in Abita Springs. Jacques was an avid hunter and fisherman for all of his life. He did enjoy outdoor vegetable gardening and woodworking. His true passion was spending time with his family. He was well liked and respected by all. Jacques is going to be deeply missed by his family and friends. In lieu of flowers, memorial contributions in memory of Jacques may be made to St. Jude Children’s Hospital. Donations may be either mailed to: 262 Danny Thomas Place, Memphis, Tennessee 38105, or can be made at ¬ https://www.stjude.org/ Relatives and friends are invited to attend the funeral services at E.J. Fielding Funeral Home, 2260 W 21st Ave, Covington, LA 70433 on Saturday, June 26, 2021 at 11:00 AM with visitation beginning at 10:00 AM. Interment will follow the services in Pinecrest Memorial Gardens. The family invites you to share thoughts, fond memories, and condolences online at E. J. Fielding Funeral Home Guest Book at www.ejfieldingfh.com.

The family of Jacques Spencer Arnoult created this Life Tributes page to make it easy to share your memories.

Jacques Spencer Arnoult, age 89, of Bush passed away on Wednesday...

Send flowers to the Arnoult family.