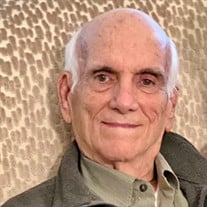 Jackie Joseph Chauffe Sr., age 88 of Mandeville, LA died on Tuesday, April 05, 2022, at Windsor Senior Living Community in Mandeville, LA. Born, Saturday, September 23, 1933 in New Orleans, LA to Paul Chauffe and Althea Roubique Chauffe. Survived by his children: Keith C. Chauffe, Mary Chauffe Haile (Mark) and Paula Chauffe Sexton (James); and sister: Myrna Schultheis. Also survived by 6 Grandchildren, Christopher, Matthew, Shannon, Elise, Evans and Elizabeth and 1 GreatGrandchild, Leonardo. He was predeceased by his wife, Catherine Weber Chauffe; son, Jackie J. Chauffe, Jr., parents, Paul Chauffe and Althea Roubique Chauffe; sisters, Jacqueline Herbert, Barbara O'Leal; and brothers, Anthony Chauffe, and Paul Chauffe, Jr. Jackie was a Sergeant in the United States Marine Corps and was stationed overseas doing the Korean War. He served as a Military Attache in Burma with the United States Embassy. He protected Richard Nixon while he was Vice President and John Foster Dulles, Secretary of State. He was involved in the construction of the Causeway Bridge while employed with Prestressed Concrete. After the dissolution of Prestressed, he worked at Lockheed Martin during the construction of the space shuttle. He possessed a great love of his country and the evolution of NASA. Jackie was an avid football fan and loved the New Orleans Saints. He also loved fishing in and around the Mandeville area, Lake Pontchartrain and Bayou Lacombe, in particular. He enjoyed taking his grandchildren or anyone who was willing to go. He did not care if he caught fish, he just had a love of being out on the water. Relatives and friends are invited to attend a Memorial Service at E. J. Fielding Funeral Home, 2260 West 21st Avenue Covington, LA 70433 on Monday, April 11, 2022 at 11:00 AM with visitation beginning at 9:00 AM until service time. Interment will follow in Mandeville Cemetery, 1609 Montgomery Street, Mandeville, LA 70448. E. J. Fielding Funeral Home has been entrusted with the arrangements. Please share a memory on the tribute wall at www.ejfieldingfh.com.

The family of Jackie Joseph Chauffe Sr. created this Life Tributes page to make it easy to share your memories.

Send flowers to the Chauffe family.