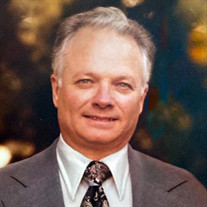 With deepest sorrow, we announce that our beloved husband, father and friend, Jack Howard Wade, Jr., passed away on Friday, July 24, 2020, at his home in Bogalusa, Louisiana. He was 85 years old. Jack was born on January 6, 1935, in New Orleans, Louisiana to the late Jack Howard Wade, M.D. and Hazel Porter Wade. He was the loving husband of Sue Smithhart Wade for 63 years; father of Jack Howard Wade, III (Cheryl), Barbara Ann Wade, Carolyn Wade Kerner (Mike), and Alicia Wade Engelhardt (Tod); 12 grandchildren, Lauren Weeg (Jason), Jack Wade, IV (Keralina), Sean Wade (Lacey), Christopher Streicher, Valerie Streicher, Katie Donner, Tricia Dupuy (Stephen), Jessica Anthony (Jonathan), Scott Engelhardt, David Engelhardt, Amy Engelhardt, and Heather Engelhardt. Also survived by 14 great-grandchildren, Kayleigh, Alyssa, Madison, Layla, Leah, Alexis, Paige, Justin, Jordan, Athena, Noah, Brady, Moira, and Jack V. Jack grew up in Lufkin, Texas where, at the age of 17, he met the love of his life, Sue Smithhart, age 15. High school sweethearts, Jack and Sue married on August 3, 1956 and shared a special and enduring love for nearly 64 years. Jack graduated from Lufkin High School in 1953 and received his Bachelor of Science degree from Tulane University in 1957. Following his college graduation, Jack and Sue made New Orleans their home for the next 60 years, later sharing time between their home in Algiers and their country home near Bogalusa, Louisiana. Jack worked in the oil field industry for 40 years, establishing many lifelong relationships with both his customers and his employers. Throughout his life, Jack’s other love, besides Sue and his family, were his antique cars, especially his beloved 1941 Buick, which he bought at age 16, drove on his honeymoon with Sue, and years later, for which he received the Navarre Restoration Award in 2016. Jack was a member of the Buick Club of America, the Classic Car Club of America, the Antique Automobile Club of America, and one of the longest active members of the Horseless Carriage Club of New Orleans, having joined in 1957. If he wasn’t tinkering with his many cars in his garage, one could find him attending car shows in New Orleans and throughout the country. Jack developed numerous close, lifelong friendships over the years with classmates, car club members, work associates, neighbors, and generally anyone he came into contact with. For him, it was all about the people. He never met a stranger. Known to all as fun-loving, happy, friendly, generous, and kind, he had a gift of making everyone around him feel at home. His insatiable curiosity about life had an effect on all who knew him. Jack spoke frequently of his pride in his family and his everlasting love for his wife, Sue. Jack lived life to the fullest even in his later years. Throughout his two-year battle with cancer, he always remained optimistic, continuing on with family gatherings, car club events, Sal & Judy’s dinners, and enjoying a nightly cocktail overlooking the riverside sunset with Sue. Jack’s passing leaves a void in our family and a hole in our hearts, but a lifetime of laughter, love, and memories which will always remain and never be forgotten. Relatives and friends are invited to attend the funeral services (COVID-19 mask required) at E.J. Fielding Funeral Home, 2260 W. 21st Avenue, Covington, LA 70433 on Tuesday, July 28, 2020 at 3:00 PM with visitation on Tuesday beginning at 1:00 PM. Interment will follow in Pinecrest Memorial Gardens. Donations in memory of Mr. Wade may be made to AmerCare Hospice, Covington, La.

With deepest sorrow, we announce that our beloved husband, father and friend, Jack Howard Wade, Jr., passed away on Friday, July 24, 2020, at his home in Bogalusa, Louisiana. He was 85 years old. Jack was born on January 6, 1935, in New Orleans,... View Obituary & Service Information

The family of Jack Howard Wade Jr. created this Life Tributes page to make it easy to share your memories.

With deepest sorrow, we announce that our beloved husband, father...

Send flowers to the Wade family.