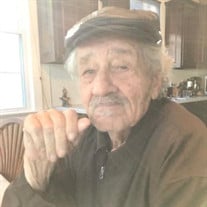 Istvan (Steve) Alexi passed away peacefully and quickly on March 31, 2021. He was born in Jàszdózsa, Hungary on September 25, 1934 to Maria and Istvan Alexi. He was the oldest of 5 boys. His country was at war during his childhood so his father was taken to the labor camps like so many other Hungarian men. As the oldest boy, Steve had to quit school at an early age and start working to help his mother feed the younger brothers. He told stories of the brothers he loved so much. In 1956, he fought in the Hungarian Revolution, but when the Revolution failed, he made the hard decision to leave his family and country and fled to Austria. He got on the first boat that was leaving Europe which was headed for America. He arrived in America in New York City on New Year’s Day 1957. He was 22 years old, did not speak any English, did not have any money and did not know anyone except for the others that traveled from Hungary on the boat with him. The actor Ernie Kovacs whose father was an immigrant from Hungary was at the immigration facility and gave him $5. With that $5 in his pocket, he headed to New Orleans with the help of a priest. In 1959, he began working for Lykes Brothers as a Longshoreman. He retired from Lykes after 30 years and moved to Loranger, LA to raise and sell cows. He loved being outside and enjoyed working with the cows for the next 20 years of his life. He was preceded in death by his beloved Grandparents, Parents, brothers László and Béla and granddaughter Brandi. He is survived by his brothers Imre and János, his 3 daughters Terri Hawn, Pam Jones (Lenny) and Denise Alexi (Buster), 4 grandchildren Blake Alexi, Shane Jones, Brad Jones and Alexi Jones, and 2 great grandchildren Ethan and Jernie. Thanks to his caregivers at Beau Provence in Mandeville who took great care of him for the last few years, especially this last year. He made a really great life out of that $5 and lived the American Dream. A private family graveside burial will be held at Dendinger Cemetery (151 Highway 21) in Madisonville, LA. An open, but informal celebration of his life will be held after from 4-6 at “The Farm” which is directly behind the Cemetery for all who wish to stop by.

Istvan (Steve) Alexi passed away peacefully and quickly on March 31, 2021. He was born in Jàszdózsa, Hungary on September 25, 1934 to Maria and Istvan Alexi. He was the oldest of 5 boys. His country was at war during his childhood so his father... View Obituary & Service Information

The family of Istvan "Steve" Alexi created this Life Tributes page to make it easy to share your memories.

Istvan (Steve) Alexi passed away peacefully and quickly on March...

Send flowers to the Alexi family.