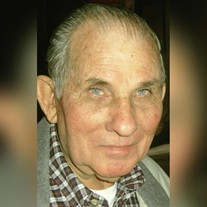 Hubert Odell Jenkins, age 84, of Covington, LA passed away on Friday, April 9, 2021. He was born on August 2, 1936 in Bogalusa, LA to Alex and Edna D. Jenkins. Hubert was a proud veteran, having served four years in the United States Army from May 1961- June 1965. He enjoyed socializing with the members of his community, spending time outdoors, and tending to his yard. He was a fighter who, time and time again, surpassed the odds to stay on this earth a bit longer with the many people he loved. Anyone who spent time with Hubert knew he was a man of few words, but his presence was well pronounced. His perfectly timed chuckles and witty remarks filled any room with a charming sense of warmth. He was the first to offer everyone who walked through his door a cup of coffee, a persimmon from his tree, and a seat at his table. If he ever lent you a spare bedroom or a couch for the night as he was so often inclined to do, you know that he never failed to have a fresh box of Butter Krisp donuts waiting for you when you woke. Hubert’s actions spoke louder and more clearly than words ever could. His kind nature and fighting spirit will forever live on in the hearts of his friends and family. Hubert is survived by his daughters, Stephanie Hadden (Russell), Deidre Jenkins Williams (Patrick), Jennifer Jenkins Tullos, Tonya Jenkins Gros (James); his nine grandchildren, Amanda, Brittany, Madison, Trevor, Blaine, Ariana, Jacob, Lincoln and Lauren; and his four (soon to be five) great-grandchildren. Hubert is preceded in death by his beloved wife Dolores Lincoln Jenkins, his son Stephen Duck-Jenkins, his eleven siblings and his parents. Relatives and friends are invited to attend the visitation on Sunday, April 18, 2021 beginning at 2:30 PM at E.J. Fielding Funeral Home, 2260 W 21st Ave, Covington, LA 70433 followed by a memorial service beginning at 5:00 PM. Please sign the E.J. Fielding Funeral Home online Guest Book at www.ejfieldingfh.com.

Hubert Odell Jenkins, age 84, of Covington, LA passed away on Friday, April 9, 2021. He was born on August 2, 1936 in Bogalusa, LA to Alex and Edna D. Jenkins. Hubert was a proud veteran, having served four years in the United States Army from... View Obituary & Service Information

The family of Hubert Odell Jenkins created this Life Tributes page to make it easy to share your memories.

Hubert Odell Jenkins, age 84, of Covington, LA passed away on...

Send flowers to the Jenkins family.