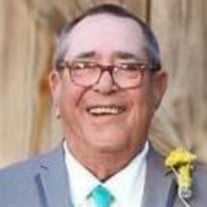 Herbert John “Jake” Jacob, Jr. passed away on September 26, 2021, in Covington, LA. He was born on July 22, 1935, in New Orleans, LA to the late Herbert John Jacob, Sr. and Paula Albertine Verlinde Jacob. Jake was the beloved husband of Margaret Rogers Jacob for 53 years. He was the loving father of Roxanne Bates, Richard Jacob, Deana Jacob (Doris Bobadilla), and Verlinde Jacob. Jake was the proud grandfather of Christopher, Cameron, and John Patrick Bates; Andres and Lilia Jacob; Verlinde Melody Johnson; and Daven and Elizabeth Jacob and great grandfather of Kinsley Johnson. He was the brother of Patricia Arnoult, the late Maria “Butz” Seiler and Albert “Sonny” Jacob. Jake entered the Navy after high school and would often talk about his time spent in Japan. Following military service he began his offshore career, eventually retiring from Chevron after 30 years as a production superintendent. He then began his second career, working inventory control at Abita Lumber Co. where he continued for over 20 years, still working full time up to the age of 84. In his later years, Jake loved spending the evenings with Margaret, watching Jeopardy and the nightly news. He also loved to hunt, and could often be found at his nephew’s camp, sharing time with family and friends. Jake was known for his ability to fix or build almost anything, and for his daily attire, a Pau Pau Jake jumpsuit. But most of all, he was known for his smile, his laughter, and his steadfast love for his wife and family. Relatives and friends are invited to the Graveside Service at Blackwell Cemetery, Folsom, LA on Saturday, October 2, 2021 at 11:00 AM. Family and friends gathering to follow from 12:30 PM to 3:30 PM at the home of Deana Jacob & Doris Bobadilla. Please Share a Memory on the Tribute Wall at www.ejfieldingfh.com.

The family of Herbert John "Jake" Jacob Jr. created this Life Tributes page to make it easy to share your memories.

Send flowers to the Jacob family.