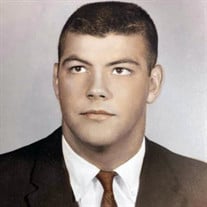 Herbert B. Cammatte passed away surrounded by family on December 2nd, 2020. He is survived by his daughters, Nicole Cammatte Wilder and Casey Cammatte. Born and raised on Lee Road, Herbert attended Covington High School and later graduated from Southeastern Louisiana University. He spent the majority of his career in Jefferson Parish, primarily as Administrator for the Pathology Laboratory, which was one of the largest private clinical laboratories in Louisiana. Herbert was very involved in local government affairs, first as an interim Kenner City Councilman followed by appointment to Director of the Jefferson Parish Health and Human Services Department. Herbert served on the Regional Planning Commission, the Louisiana Exposition Authority, and the Republican State Central Committee. Later in life, Herbert owned and operated Green Tree Services. As a part of Mardi Gras history, Herbert reigned as the first ever King of the Krewe of Argus in 1985 when the Krewe transitioned away from celebratory monarchs. An avid hunter and fisherman, Herbert won many awards from the New Orleans Big Game Fishing Club, including Tag and Release Champion. Herbert was preceded in death by his wife, Meg Cammatte, parents Joseph & Erma Cammatte, and his sisters Anna Dutsch and Carrie Mae Jenkins. The family would like to thank Donald Naylor and the staff of Belle Maison Nursing & Rehabilitation Center for their care of Herbert during his final years. A memorial service will be held on December 2nd, 2021 at 2:00 PM at Christ Episcopal Church, 120 S. New Hampshire Street, Covington, LA 70433. The services will be held in the Chapel, as Herbert's ashes are spread in the Memorial Garden. The family invites you to share thoughts, fondest memories, and condolences online at E. J. Fielding Funeral Home Guest Book at www.ejfieldingfh.com.

The family of Herbert B. Cammatte created this Life Tributes page to make it easy to share your memories.

Herbert B. Cammatte passed away surrounded by family on December...

Send flowers to the Cammatte family.