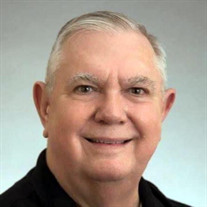 Gregory Wayne Wood, born January 3, 1947 to the late Edwin Van Buran Wood and Lolita Baas Wood, passed peacefully in the early morning of August 8, 2020, after battling heart disease. During his last days, he had the company of his brother Keith Schurr, and sister-in-law Natalie Schurr. Born in Alabama, Greg spent most of his childhood growing up in New Orleans. His love of Cajun and Creole food, music, and culture remained with him throughout his life. After graduating from the University of New Orleans in 1968, he briefly became a New Orleans Police officer before taking a job in textbook publishing and sales that landed him in Chicago. There, he met and eventually married Barbara Jo Wood and adopted her son Scott. Together, Greg and Barbara had his son, Christopher Gregory Wood. Quickly tiring of the inhospitable northern winters, Greg moved his family first to Houston and later to Plano, TX. He bought his first house and raised his family there. In 1984, he took an opportunity to be part of a new venture and moved the family to Reston, Virginia, where his sons would graduate high school. He taught Christopher his love for history and reading. Greg was an incredible writer with a knack for marketing. He eventually settled in Mandeville, Louisiana. By then he had learned that he did not like working for companies and worked for himself in several ventures for the remainder of his life. During that journey, he became involved with the Home Builders Association. He wrote and published several trade magazines over a twenty-year period. In his later years, he also became a Realtor. Greg’s wish is that Christopher continue the extensive genealogical research he did on the Wood family and to make sure it is preserved for future researchers. His remains will be scattered per his wishes. He also wants his fraternity brothers, with whom he remained lifelong friends, to know how much he enjoyed their camaraderie. Greg was proud of his grandchildren, Joshua, Cole, Jackson, Kennedy, and Elijah Wood, sons of Scott Wood. His niece, Jennifer, and nephew, Jared, were in his heart. Memorial arrangements will be announced later when lockdown conditions permit. Please sign the E.J. Fielding Funeral Home online Guest Book at www.ejfieldingfh.com.

Gregory Wayne Wood, born January 3, 1947 to the late Edwin Van Buran Wood and Lolita Baas Wood, passed peacefully in the early morning of August 8, 2020, after battling heart disease. During his last days, he had the company of his brother Keith... View Obituary & Service Information

The family of Gregory Wayne Wood created this Life Tributes page to make it easy to share your memories.

Send flowers to the Wood family.