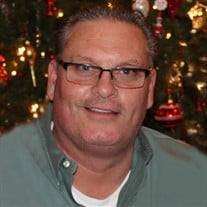 On September 19, 2021 Gregory S. Pitcher ascended into heaven at the age of 57. He and his beloved wife, Janet Q. McDuff-Pitcher, resided in Mandeville, LA with their two cats Tom and Jerry. They met in 1999 and married on April 12th, 2002 in New Orleans, LA blending their two families, with Greg’s son Brek and daughter Kirsten, and Janet’s three sons Charles, John and Christopher. They enjoyed 19 years of marriage and 6 grandchildren together. He is survived by his children, Brek E. Pitcher and Kirsten D. Pitcher, his step-sons Charles H. McDuff (Theresa), John E. McDuff (Allison), and Christopher M. McDuff (Danyele), his father Wesley D. “Duke” Pitcher, his mother Dorothy M. Pitcher, his siblings, Gwen L. Morgan (Mike) and Gavin A. Pitcher (Christina). He is also survived by his six grandchildren, Amelia R. Pitcher, Charlie H. McDuff III, Vince A. McDuff, Olivia C. McDuff, John “Jack” E. McDuff, Paul J. McDuff. Greg also leaves behind 3 nieces and 3 nephews that loved him dearly back in Illinois. He was preceded in death by his grandparents, Wesley “Duke” and Emma Pitcher, Victor and Wilma Gunther, and his father and mother in-law, Ephan and Dorothy Macaluso. In early August, Greg was admitted to St. Tammany hospital in Covington, LA due to COVID. He battled at home for 2 weeks and continued fighting for the following 6 weeks. After a long and arduous fight, on Sunday, September 19 he lost his battle to this terrible virus. Gregory Scott Pitcher was born in Nuremberg, Bavaria, Germany on September 16, 1964 to Duke and Dorothy Pitcher. He spent his early years growing up in Peoria, IL where he graduated from Peoria Central High School. At the age of 18, he enlisted to serve his country in the U.S. Navy. He excelled in basic training, qualifying him to try out for the immensely selective BUD/S-Basic Underwater Demolition/SEAL program. Greg graduated BUD/S class 125 in December 1983 then attended Army Airborne training in Ft. Benning, GA. He was assigned to SEAL Team 3 from 1984-1990 where he deployed with 3 SEAL platoons in support of Western Pacific combat operation in Southeast Asia. He was then selected to represent the U.S. Navy and NSW community from 1990-1992 as a member of elite LEAPFROG Parachute Team, where he performed high level free fall parachute demonstration shows throughout the country including multiple sporting events and stadiums. After proudly serving his country for 10 years, Greg retired from the U.S. Navy in 1992. He received multiple awards including the Navy Commendation Medal and achievement medals for his service. Greg was a tenured member of the sales team at Interior/Exterior Building Supply. He was loved and revered by his co-workers, clients, and company as a whole. Greg loved his job and was one of the best in the field. His larger-than-life personality and never failing ability to make friends anywhere he went, combined with his love for his work and knowledge of the industry, made him an asset in the Commercial Division of Sales for 24 years. To his grandchildren Greg was known and loved as “Papa G”. Greg took his role as grandfather very seriously to ensure his grandbabies had as much fun as they possibly could while they were with him. His infamous playful, child-like zest for life only came more alive when spending time with them. Greg enjoyed socializing with his friends and telling stories about his days as a Navy SEAL. He loved his children and his family back in Illinois. Greg enjoyed many 4 wheeling trips he took with his close friends, his brother and nephews. He loved the great outdoors where he could hunt, fish, and grill… but he also loved his air condition! Greg will be missed but truly never forgotten. Due to COVID-19, social distancing is encouraged, and masks are required to attend services. Relatives and friends are invited to attend the Funeral Services at E.J. Fielding Funeral Home, 2260 W. 21st Ave., Covington, LA 70433 on Friday, October 1, 2021, at 10:00 AM with Visitation on Friday beginning at 8:00 AM until service time. He will be laid to rest in the Southeast Louisiana Veterans Cemetery, 34888 Grantham College Dr., Slidell, LA 70460. In lieu of flowers, memorial contributions in memory of Greg may be made to one of the two charities that were of importance to Greg, Wounded Warrior Project at https://www.woundedwarriorproject.org/donate or Ronald McDonald House Charities of South Louisiana at https://rmhc-sla.org/. E. J. Fielding Funeral Home has been entrusted with the arrangements. The family invites you to share thoughts, fond memories, and condolences online at E. J. Fielding Funeral Home Guest Book at www.ejfieldingfh.com.

On September 19, 2021 Gregory S. Pitcher ascended into heaven at the age of 57. He and his beloved wife, Janet Q. McDuff-Pitcher, resided in Mandeville, LA with their two cats Tom and Jerry. They met in 1999 and married on April 12th, 2002 in... View Obituary & Service Information

The family of Gregory Scott Pitcher created this Life Tributes page to make it easy to share your memories.

Send flowers to the Pitcher family.