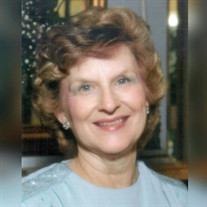 Gloria Marie Newcomer Hebert was born in 1929 in Sweetlake, LA. Her parents, Frank and Elsie raised Gloria and her 6 brothers and sisters in Lake Charles, LA. Gloria was the last surviving sibling. Gloria had exceptional success in school and in 1947, in her senior year, she was voted Class President, Best Citizen and was Editor of the Lake Charles High Wildcat Yearbook. After graduation, she lived at home and worked for a local bank and eventually began working for Cities Services. During high school, she began dating a local boy, Jerry Hebert, whom she later married. After he graduated from dental school, he enlisted in the Navy as an officer and the couple was assigned to a station outside of Memphis, TN. It was there that their first child, Michael was born. In 1955, her husband was accepted into the orthodontic residency program at the University of Pennsylvania at Philadelphia, so they rented a small apartment south of the city. Gloria stayed there with Michael everyday and was a very devoted mother. She and Michael returned to Lake Charles for the delivery of her second child, a daughter, named Catherine. Her husband finished his training and began the first orthodontic practice in Lake Charles. They had three more sons, Paul, James and Louis. All children are surviving and are married with children. At age 41, Gloria and Jerry were planning a trip out of the country. A suspicious lump in her left breast demanded immediate biopsy. It was carcinoma which in 1970 was treated with a radical mastectomy, radiation therapy, and a complete hysterectomy. She became very ill as a result of this treatment and her marriage went into a rapid decline. After her divorce, she enrolled as a freshman at McNeese in accounting. She continued to raise five children and attended classes towards her degree. In 1974, she received a Bachelor’s degree summa cum laude in accounting. She returned to work at CITCO and insured that all five of her children would be college graduates and responsible citizens. All in total, her children have acquired 44 years of higher education, many with advanced degrees. She is the proud mother of an environmental scientist, an endodontist, two petroleum engineers and a cardio-vascular surgeon. While she was building her retirement home in Mandeville, Gloria was helping with the care and cooking meals for her older sister, Margaret and her husband, and for another housebound sister in law, Dottie. During retirement, Gloria has enjoyed her 8 grandchildren and pursued her interests in traveling, gardening, reading biographies, Mediterranean cuisines and other cultural activities. She attended St. Timothy’s Methodist Church in Mandeville, LA and was a model and charter resident at Beau Provence Memory Care facility since 2014. All funeral services are private with interment in St. Joseph Abbey Cemetery.

Gloria Marie Newcomer Hebert was born in 1929 in Sweetlake, LA. Her parents, Frank and Elsie raised Gloria and her 6 brothers and sisters in Lake Charles, LA. Gloria was the last surviving sibling. Gloria had exceptional success in school and... View Obituary & Service Information

The family of Gloria Marie Hebert created this Life Tributes page to make it easy to share your memories.

Gloria Marie Newcomer Hebert was born in 1929 in Sweetlake, LA....

Send flowers to the Hebert family.