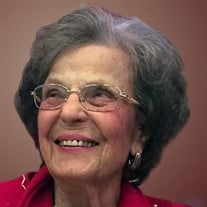 After ninety-six years of a life, Gladys Bayhi Badeaux passed away peacefully in her sleep on Friday, July 16th 2021. She was born Gladys May Bayhi in New Orleans, LA on April 2, 1925 to Hubert Bayhi and Julia Dupas Bayhi. She was the last surviving sibling of nine: Vera, Dorothy, Lillian, Ethel, Helen, Hazel, Hubert Jr., and Candidus. And was the last of “The Sisters”, very gracious and tenacious old school ladies with unbendable moral fiber. She was a graduate of both St Joseph’s Academy and Soule College of New Orleans. Upon graduation, she joined Higgins Industries (developers of the D-day landing craft) as her contribution to the war effort. She ended her business career as an adjudicator with Veterans Administration in 1980. On October 23, 1944, she married her beloved husband of 58 years Alphonse Pierre Badeaux, Jr. and raised three children, Gregory Pierre Badeaux, Susan Badeaux Fox, and Anne B. Summers. Longtime residents of New Orleans, they retired to Waveland, MS for 18 years until Hurricane Katrina destroyed her home and way of life. She relocated to Covington, Louisiana in 2006 to settle near family. A devout catholic, she was involved in various religious organizations throughout her life. She was a member of Council 3854 Knights of Columbus Ladies Auxiliary and in recent years St Peter’s of Covington Altar Society. Among the community activities she was involved with in New Orleans, Waveland and Covington are the V.F.W., American Legion, Mississippi Welcome Center and St Tammany Parish Hospital Volunteer. She was preceded in death by her husband Alphonse, her son Gregory and her grandson James C. Fox, Jr. She is survived by her daughters Susan and Anne (Dreux Summers); grandchildren Angelle (Matthew), Christopher (Melissa), Nicole (Kevin), Marcelle (John), Susette (Rod) and Johnny (Lana); great grandchildren Spencer, Madelaine, Cayden, Lillian, Owen, Matthew, Sophie, Katherine, Charlotte, Elizabeth, Christopher and Lennon. She is also survived by many nieces, nephews, great and great great nephews and nieces. Very devoted to family, she liked to surround herself with her family especially her “little people”. Her refrigerator was literally covered with pictures of her little ones and all the pictures from those who were out of town. A special thanks to those caregivers who gave her the assistance she needed to live her last years to the fullest. Relatives and friends of the family are invited to attend the Funeral Mass at St. Peter Catholic Church, 125 East 19th Avenue, Covington, LA on Friday, July 23, 2021 at 11:00 AM. Visitation will begin at 10:00 AM. Interment will take place immediately following the Mass in Greenwood Cemetery, New Orleans, LA. In lieu of flowers, donations in her name may be made to: St. Jude Children Research Hospital, 501 St Jude Place, Memphis, TN 38105 or on line. Please Share a Memory on the Tribute Wall at www.ejfieldingfh.com.

After ninety-six years of a life, Gladys Bayhi Badeaux passed away peacefully in her sleep on Friday, July 16th 2021. She was born Gladys May Bayhi in New Orleans, LA on April 2, 1925 to Hubert Bayhi and Julia Dupas Bayhi. She was the last... View Obituary & Service Information

The family of Gladys Bayhi Badeaux created this Life Tributes page to make it easy to share your memories.

After ninety-six years of a life, Gladys Bayhi Badeaux passed...

Send flowers to the Badeaux family.