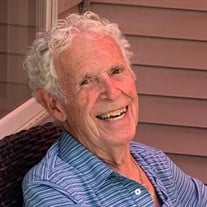 Dr. Gerald Christian Keller, 86, a man of great faith, died peacefully at home on December 21, 2020. Jerry, as he was lovingly called by friends and family, was a devoted husband of 61 years to Joan Arnold Keller, (deceased May 2019), loving and supportive father to his children and grandchildren, and civic leader both locally and nationally. Jerry graduated from Jesuit High School, Loyola University, and LSU Medical School New Orleans. Jerry began his medical calling as a Family Practice Physician in the U.S. Army where he and Joan moved from Louisiana to Tacoma Washington to Kitzingen and Heidelberg Germany. He moved to Mandeville in 1963 to practice family medicine with Dr. Roy Gregory (affectionately known as Uncle Roy), where he raised his growing family. Jerry soon became active serving on many school and local boards at Our Lady of the Lake Church and School, St. Scholastica Academy, and St. Paul School as well as 4th Ward, Mandeville Chamber of Commerce and bank boards. He served as medical team doctor to both Mandeville High School and St. Paul School. Jerry was an active member of the Knights of Columbus, the OLL Men’s Club and the OLL Choir. Jerry was an Associate Professor at LSU Medical Center, New Orleans. Locally, Jerry served as Mandeville Town Council Member and Mayor, Pro Tem from 1968-1980. Professionally, Jerry was very active with the American Academy of Family Physicians, serving on commissions and holding all offices at the state level including president and nationally serving as vice-president of the AAFP. His passion was serving as chair on the Task Force on Rural Health and expanding Family Practice as a specialty to medical students who might serve as rural doctors. Jerry served as St. Tammany Parish Hospital Chief of Staff and Medical Director of Lacombe Nursing Home, Pontchartrain Health Care Center, and Heritage Manor Nursing Home. In 1985, after joining Ochsner, Jerry became Associate Chair of the Department of Family Medicine and in 1997 Acting Chair. Jerry and his partner Dr. Gregory were instrumental in first expanding St. Tammany Parish Hospital and later expanding Ochsner to the Northshore where their picture hangs in the Northshore Clinic lobby. Jerry received many accolades and awards throughout his career including AAFP President’s Award, A. H. Robins Award, Good Housekeeping Doctor of the Year, and many others. He was greatly devoted to his patients. His patients have continued to express to his family their gratitude and appreciation for his personal nature and for his medical care. His most cherished award was receiving the Order of the St. Louis Award with his wife, Joan, also a devoted Catholic and vested in serving her community. This award highlights a lifetime of lay ministry. Jerry and Joan shared many great friends from their primary years, military days, and during the many years they lived in Mandeville, where they made their home. They shared church, caroling, camping, travel, playing bridge, bowling but most importantly tennis with these cherished friends. After retirement, Jerry ate lunch every Wednesday with a group of friends affectionately known as “The Grumpy Old Men” whom we owe a debt of gratitude for their continued care and company even when it was difficult for Jerry. Dr. Keller is preceded in death by his wife Joan Arnold Keller, his daughter Sharon Marie Keller, his parents Dewey Cornelius Keller Sr. and Aurelie Weber Keller, and his brothers Roger Keller and Dewey Keller Jr. He is survived by his children: Gerald (Chris) Keller Jr., (wife Marilyn); John Keller (wife Midge); Jennifer Walkenford (husband Jon; Jody Birotte (husband Byron), Daniel Keller (wife Wendy), Scott Keller, Roger Keller II (wife Allyson), Joan (Joni) Keller, and Greg Keller (wife Bethany). He is also survived by two grandchildren, Remy (husband Jonathan) and Charles (Mac), who he and Joan raised as their own. Jerry is survived by his loving 30 grandchildren (their spouses), 13 great-grandchildren and a host of adoring nieces and nephews. Jerry and Joan were friends, surrogate parents and grandparents to countless others in the Mandeville area. A public wake will be held Monday 6pm to 9pm at Our Lady of the Lake Church, 312 Lafitte Street, Mandeville, Louisiana 70448. Due to COVID-19 restrictions, face mask and social distancing are required to attend visitation. A private family mass will be held at a later date. We appreciate our friends’ understanding of COVID-19 precautions needed to be taken at this time. As a family we thank Notre Dame Hospice, Trudy Hall, Jewel Brown and Jazzmin Morris. In addition, we thank Mandeville Bake Shop for keeping us in donuts, Elizabeth Cordes, Mary Adams, Landon Washington, and La Lou for the countless meals for years, and Joni our sister who lived with and cared for both our parents at their end of life. In lieu of flowers and as an expression of sympathy, memorial contributions may be sent to Kickin’ Parkinson’s, a Team Fox in support of the Michael J. Fox Foundation located at 3500 N. Causeway Blvd. Metairie, LA. 70002 or www.kickinparkinsons.com. The Keller family invites you to share thoughts, fond memories, and condolences online at E. J. Fielding Funeral Home Guest Book at www.ejfieldingfh.com.

Dr. Gerald Christian Keller, 86, a man of great faith, died peacefully at home on December 21, 2020. Jerry, as he was lovingly called by friends and family, was a devoted husband of 61 years to Joan Arnold Keller, (deceased May 2019), loving... View Obituary & Service Information

The family of Dr. Gerald Christian Keller Sr. created this Life Tributes page to make it easy to share your memories.

Send flowers to the Keller family.