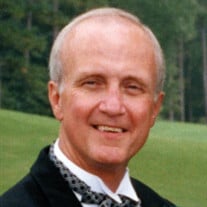 George Lawrence Collins, Jr., 76, a native of New Orleans, Louisiana, and a resident of Mandeville for the past 38 years, passed away on Friday, January 15, 2021 in Mandeville. He is survived by his wife, Judy Collins, the love of his life, who he informed on their second date that she would marry him someday. They celebrated their 53rd wedding anniversary this past fall. Also survived by his children, who he adored, Dr. Bridgette M. Collins-Burow (Matthew), Brett M. Collins (Patricia) and the four joys of his life, his grandsons Brandon Edward Burow, Nathan Lawrence Burow, Logan Anthony Collins and Joshua George Collins. He was never happier than when he was able to spend time and vacations with them. Hugs, kisses and the words “I Love You” were always a part of the moments that they shared. He is the brother of Patricia Roth Schmidt and was preceded in death by his parents George L. Collins, Sr. and Isabelle V. Collins. George considered his greatest achievement in life was not fame, fortune, status or any other material accomplishment. It was that he was able to lovingly raise and guide his two children to be the loving, kind, hard working, successful individuals that they are. For all that knew him, they would agree, that the love of family and friends defined the way George lived. He was the greatest role model – an amazing, devoted dad, coach, colleague, grandfather, husband and friend. As a husband, George was Judy’s love and best friend. As a dad, he believed in his children’s dreams and aspirations and instilled the joy of love and family. As a grandfather, he was the gatekeeper of our family, sharing stories, fun, and love with his grandsons, ensuring that his love and spirit will live on through all of us. He will be missed by all who knew him. He is a 1962 graduate of St. Aloysius (a Crusader always), secured his Bachelor’s degree at Southeastern Louisiana University and was a dedicated employee and retired after 41 years of employment with Traveler’s Insurance Company. He was responsible for setting up the first football and baseball teams in Driftwood Park Subdivision to participate in the Kenner Recreation Department’s sports program. He volunteered as a coach for five years and took his last football team to become city champs. The subdivision honored him for his dedication to the kids by asking him to be the first King of the Driftwood Park Carnival Parade, an honor he was unable to fill due to a mandatory business commitment in Hartford, Connecticut. He did serve as the parade’s second king. He also coached his kid’s recreational soccer, baseball and softball teams as they grew up and never missed a game when they played soccer for Mandeville High. George had many critical illnesses in his lifetime, but took each one of them on with determination to survive and not place a burden on his family during these difficult times. He was the recipient of a kidney transplant in 2005, and each day since, he has said a prayer for the donor and their family, who generously gave their loved one’s kidney to him. He treated that kidney with care and it gave him the opportunity to live a full life for 15 and a half years allowing him to see his 4 grandsons born, be a part of their life and watch them grow into the fine young men they are becoming. He wanted his donor’s family to know that his kidney was still doing well at the time of his passing. You have his and his family’s eternal gratitude for that gift. In consideration and concern for friends and family, George and his family did not want to have them possibly exposed to the COVID-19 virus, so they have elected to have a private service. In lieu of flowers, please consider a donation to the Kidney Foundation of LA. The family invites you to express your fond thoughts, memories and condolences online at www.ejfieldingfh.com.

George Lawrence Collins, Jr., 76, a native of New Orleans, Louisiana, and a resident of Mandeville for the past 38 years, passed away on Friday, January 15, 2021 in Mandeville. He is survived by his wife, Judy Collins, the love of his life,... View Obituary & Service Information

The family of George Lawrence Collins Jr. created this Life Tributes page to make it easy to share your memories.

Send flowers to the Collins family.