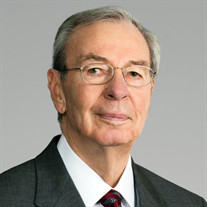 On Friday, August 7, 2020, Gene W. Lafitte, Sr., age 89, died peacefully at home with his loving wife by his side. Gene was born in Shreveport, Louisiana on November 27, 1930, the second son of Antoinnette Hering and Leon Walpole Lafitte. Gene graduated from C.E. Byrd High School in Shreveport at the young age of 16, where he achieved distinction scholastically and athletically on the basketball team. Gene attended Louisiana State University and received a B.A. degree in 1950 and where he also served as the cadet colonel of the ROTC. He was a 1952 graduate of the Paul M. Herbert Law Center at Louisiana State University where he served as Associate Editor of the Louisiana Law Review and graduated as a member of Order of the Coif. Gene served in the United States Air Force Judge Advocate Corps from 1954 to 1956. On April 9, 1955, Gene married Jacquelyn Moeller whom he met in 1952. Jackie’s partnership during a 65-year marriage was instrumental in every personal and professional challenge and achievement throughout Gene’s life. She was also his life-long best friend -– “Jackie and Gene.” They had three children, six grandchildren and one great-grandchild who were the source of great joy and pride throughout their married lives. Gene met his second family, Liskow & Lewis, in 1956, where he founded the litigation department, and served for 20 years as the Firm’s president and managing partner before being named chairman. He loved his law partners and the practice of law – a career which lasted 67 years. Gene was a passionate lawyer. During the course of his career, he received a long list of professional accomplishments. Gene’s induction to the fellowship of the American College of Trial Lawyers in 1972 brought him and Jackie many dear friends. He was deeply honored to serve as President of the College from 1984 to 1985. Gene was presented with the LSU Law Center’s Distinguished Alumnus of the Year award in recognition for his personal and professional achievements and loyalty to his alma mater, including serving as Chairman of the Board of the LSU Foundation. He was awarded The Lifetime Achievement Award in Energy Litigation from the Institute for Energy Law in 2007. Gene was a member of the American Bar Association Standing Committee on the Federal Judiciary from 1981 to 1987, including evaluating the appointments of both Justice Scalia and Chief Justice Rehnquist Gene loved life and always lived fully in the moment. He had a thirst for knowledge and new experiences. In his later years, you would find him duck hunting, practicing his guitar or standing at his easel painting everything from portraits to landscapes. He believed that laughter is the mainspring of life, which was always reflected in his self-deprecating sense of humor. He will truly be remembered for his humility, integrity, and fidelity to the highest ethical standards. He was a gentlemen of all gentlemen. Gene will be dearly missed by his sweetheart, Jackie; by his children Lyn Nicodemus (Luis) and David Lafitte (Dawn); by his grandchildren, Ashlan Coffin, Allie Lafitte, Caty Lafitte, Will Nicodemus, Emily Lafitte and Isabel Nicodemus. He was predeceased by his oldest son, Gene Jr. Gene will also be missed by his Liskow and Lewis family and many colleagues. PLEASE DO NOT SEND FLOWERS or make contributions in his memory. No memorial events are currently scheduled.

On Friday, August 7, 2020, Gene W. Lafitte, Sr., age 89, died peacefully at home with his loving wife by his side. Gene was born in Shreveport, Louisiana on November 27, 1930, the second son of Antoinnette Hering and Leon Walpole Lafitte.... View Obituary & Service Information

The family of Gene W. Lafitte Sr. created this Life Tributes page to make it easy to share your memories.

Send flowers to the Lafitte family.