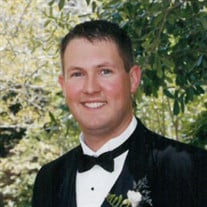 “God saw him getting tired and a cure was not to be, so he put his arms around him and whispered, Come to Me.” Gary Wells Keyser passed peacefully from this world on Sunday, January 3, 2021, in Covington, Louisiana. Gary was born November 27, 1972, in Baton Rouge, Louisiana, to Wendy and Gary Keyser. He attended Our Lady of Mercy Parochial School from kindergarten through grade seven, and Catholic High School from grade eight until graduation in 1990. Gary began his college studies in the fall of 1990 at Southeastern Louisiana University and simultaneously enlisted in the Louisiana Air National Guard at age 17. After one semester at SLU, he was ordered to basic training at Lackland Air Force Base in San Antonio, followed by an assignment to Sheppard Air Force Base in Wichita Falls, Texas, for specialty training. Upon completion of his training at Sheppard, he was assigned to the 214th Electronic Installation Squadron at Jackson Barracks in New Orleans while he completed his college education at Southeastern, majoring in Business Management. He was also a member and officer of Kappa Alpha Order fraternity. Gary applied for, was accepted, and completed officer training at McGhee Tyson ANG base in Tennessee in 1999, returning to Louisiana as a Second Lieutenant and was transferred to the 159th Fighter Wing of the Louisiana Air Guard stationed at Belle Chasse Naval Air Station where he supervised aircraft maintenance and munitions operations. During this time he was selected to attend pilot training at Sheppard AFB; he returned to the 159th for active service and where he later served as a group intelligence officer and Operations Security (OPSEC) for the Air National Guard. His military awards and decorations include the Basic Training Graduate Ribbon, Firearms Expert Ribbon, Air Force Achievement Service Medal, Air Force Outstanding Unit Award, Armed Forces Service Medal with “M” device, National Defense Service Medal, Air Force Good Conduct Medal, Air Force Service Medal, Humanitarian Service Medal, Air Force Meritorious Service Medal, Air Force Longevity Service Ribbon, Louisiana Emergency Service Ribbon, Louisiana Achievement Medal, Louisiana War Cross, and Louisiana Longevity Ribbon. During his tenure with the Air National Guard, he participated in many overseas deployments and supported numerous state and federal emergency responses. One of his treasured memories was driving and assisting in the delivery of the "Spirit of Louisiana", the first fire engine built and commissioned in Louisiana to assist the City of New York in the replacement of lost fire equipment after the 9/11 attacks in 2001. He retired from the Air Guard with the rank of Major after more than twenty years serving his country. Gary enjoyed boating and being on the water and riding motorcycles, but his greatest pleasure was being with his children; he had an active interest in all they were interested in, all they participated in. Gary is preceded in death by his brother, Kevin Ryan Keyser; his maternal grandparents Marjorie and Wally Wells; and his paternal grandparents Sybil and David Keyser. He is survived by his deeply-loved daughters Kate, Abby, and Emma Keyser; and former wife Claire Landry of Mandeville; his parents, Colonel (Ret) and Mrs. Gary L. Keyser; brothers Michael Keyser and Chris (Lauren) Keyser and nieces Caroline and Lillian Keyser all of Baton Rouge; niece Kelsey Keyser and nephew Karson Keyser of Roseland, Louisiana; and very special and devoted friend Ashley McMenamin of Covington. He will be missed by all. Burial will be private. The Keyser family invites you to share thoughts, fond memories, and condolences online at E. J. Fielding Funeral Home Guest Book at www.ejfieldingfh.com.

&#8220;God saw him getting tired and a cure was not to be, so he put his arms around him and whispered, Come to Me.&#8221; Gary Wells Keyser passed peacefully from this world on Sunday, January 3, 2021, in Covington, Louisiana. Gary was born... View Obituary & Service Information

The family of Gary Wells Keyser created this Life Tributes page to make it easy to share your memories.

“God saw him getting tired and a cure was not to be, so he put...

Send flowers to the Keyser family.