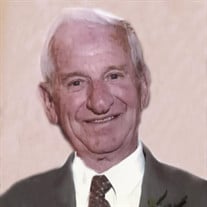 Frederick Lemeul Rogers, (Fred, Freck, Daddy, Grandpa, Gpa) went to his eternal resting place on April 8, 2022. He was born on April 21, 1927 to his late parents Edith and Merrill Rogers, in a little house near the railroad tracks in Hammond Louisiana. He married the love of his life Frances Rogers, on March 13, 1948, and we all know the angels rejoiced when they were finally together again. Fred and Frances settled in Covington Louisiana in 1957 where they would raise their children, grandchildren and great grandchildren. He is survived by his four children, which he said made him the luckiest man on earth, Cindy Kahao (Ken), Becky R. Holliday (Derrell), Randy Rogers (the late Julie), Fred D. Rogers; nine grandchildren, Austin Green, Holly Flattmann, Carrie Granier, Clint Holliday, Jolleen Holliday, Amie Rogers, Alison Rogers, Amanda Sisler, and Sarah Rogers. The Great grandchildren were the real apples of his eye, Julia, Layne, Caleb, Randi, Ella, Kaitlyn, Emma, Roman, Remy, Raelynn, Levi, Alexis, Reagan, and Michael and one Great Great grandbaby, Seyla. He is survived by one brother, Lloyd Rogers and was preceded in death by his siblings, Bill Rogers, Katherine King, Sandra Creel, Barbara Keen, and Charles (Buddy) Rogers. I’m not sure how to give a man’s life the honor he deserves in just a few typed lines. Fred served in WW II as a Navy Seaman on the USS Argonne. He worked for “Ma” Bell Telephone company for 37 years. He enjoyed his retirement by keeping bees, farming, fishing, hunting, storytelling, traveling but most of all, loving his family. He always said how lucky he was to have such a wonderful family, but it was really us who were the lucky ones. To say he was special would be an understatement. To say he was a prince of a man would be more accurate. He was humble, kind, hard working, loving, funny, stubborn, set in his ways, and a one of a kind true southern gentleman. He made lifelong impressions on everyone he met. The family would also like to thank everyone at The Trace who loved and cared for our Gpa and to the nurses from Passages Hospice for their support. In lieu of flowers donations can be made out to Tangi-Tamington Beekepers Association, ℅ Bruce Scharwath, 3410 Sugar House St, Paulina La 70763. Relatives and friends are invited to attend the funeral services at E.J. Fielding Funeral Home 2260 West 21st Avenue, Covington, LA 70433 on Monday, April 11, 2022 at 3:00 PM with visitation beginning at 1:00 PM until service time. Interment will following in Pinecrest Memorial Gardens, 2280 W 21st Avenue, Covington, LA 70433. E.J. Fielding Funeral Home has been entrusted with the arrangements. Please sign the E.J. Fielding Funeral Home online Guest Book at www.ejfieldingfh.com.

Frederick Lemeul Rogers, (Fred, Freck, Daddy, Grandpa, Gpa) went to his eternal resting place on April 8, 2022. He was born on April 21, 1927 to his late parents Edith and Merrill Rogers, in a little house near the railroad tracks in Hammond... View Obituary & Service Information

The family of Frederick Lemeul Rogers created this Life Tributes page to make it easy to share your memories.

Send flowers to the Rogers family.