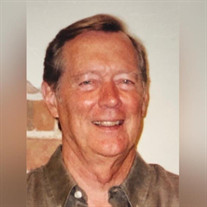 Frank Reynolds Whiteley, Jr. passed away on Sunday, September 27, 2020 at the age of 83. He was a great husband, great dad, great grandpa, and great great-grandpa. Beloved husband of Frances Russell Whiteley, loving father of Annmarie Whiteley Gutter (Dr. Andrew Elliott Gutter) and Frank Reynolds Whiteley III (Conlee Schell Whiteley). Son of the late Aglea Delhomme Whiteley and Frank Reynolds Whiteley, Sr., brother of Betty and Susan Whiteley. Grandfather of Grant Gutter (Niki Gutter), Barrett Gutter and Frank R. Whiteley, IV. Great-grandfather of Xander Gutter. Frank was born and raised in Augusta Georgia. He was a paper boy and delivered the Augusta Courier. He attended Mercer University on a full basketball scholarship. There he met his wife Frances. They were married in 1959. Frank joined the Army National Guard and was stationed in Dothan, Alabama. From there Frank and Frances moved to southeast Georgia, living in Woodbine and St. Marys. Eventually, employment opportunities took Frank and Frances to Pensacola Florida and then to New Orleans, Louisiana where Frank worked for many years for American Cyanamid, now Cytech. Frank and Frances raised their children in New Orleans and eventually moved to Covington, Louisiana. While living there Frank retired from Cytech. Raised Lutheran, Frank was deeply passionate about the teachings from the Bible and of Martin Luther. Frank later became a member of Trinity Episcopal Church on Jackson Avenue, New Orleans. Frank was both deeply religious and a student of religion. Nothing delighted him more than a thoughtful religious discussion with friends or members of the clergy. While never a member of a Krewe, or a rider on a float, no one enjoyed Mardi Gras more than Frank. Upon first arriving in New Orleans, his family had the flu, but he did not and went to his first parade. Upon returning from the parade, he told his family to get well soon, because they would never see a free party like the one he had just seen. Over the next 50 years, Frank thoroughly enjoyed this annual free party. Happy Mardi Gras! All funeral services are private. In lieu of flowers, the family requests that any donations be made, in memory of Mr. Frank R. Whiteley, Jr. to the American Cancer Society. E.J. Fielding Funeral Home is in charge of arrangements. Please sign the E.J. Fielding Funeral Home online Guest Book at www.ejfieldingfh.com.

The family of Frank Reynolds Whiteley Jr. created this Life Tributes page to make it easy to share your memories.

Send flowers to the Whiteley family.