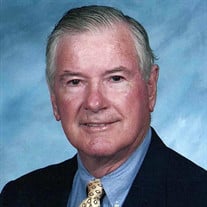 Frank Hester, a 45-year resident of Mandeville passed away on August 13, 2021 at the age of 90. Frank was born on September 17, 1930 in Knightdale, North Carolina to William Frank Hester and Glady Blackstock Hester. Frank is survived by his daughters, Patti Hester, Suzanne Brockhaus (David), and Donna Hill (Robert) as well as his five grandchildren, Sarah Meyer (Ryan), Andrew Hester, Matthew Brockhaus, Alexander Hill, Grace Rogers and two great grandchildren, Eleanor and Charlotte Meyer. He is also survived by his sister Rachel Douglas and numerous loved ones spreading across the Southern United States. He is predeceased by his bride of 49 years, Marie Reid Hester; his daughter, Laura Rogers; his sister, Virginia Burt; his brother, James Hester; and his parents, William and Glady Hester. Frank was fond of recalling his modest upbringing in Georgia in a home without electricity or running water and marveling at how much of the world he got to experience throughout his long life. Frank was a United States Air Force Veteran who served in Europe during the Korean War. Frank attended college in Georgia and was an avid Georgia Bulldogs fan. Frank, Marie and their four daughters moved to Mandeville in 1976. He was a dedicated employee of the Hartford Insurance Company for over 30 years before retiring in 1994. Upon retirement, Frank enjoyed the opportunity to play more golf and spend more time with family. Frank was a devout congregant of St. Timothy United Methodist Church; member of the Northshore Republican Men’s Club, and an active golfer at Covington Country Club. Frank attributed his long, healthy life to staying active and a nightly glass of scotch. Frank loved to play golf and often boasted about being able to “shoot his age” and even shot a hole in one last year. He was also a proud member of the Sons of the American Revolution. Relatives and friends are invited to attend the funeral service at St. Timothy’s United Methodist Church, 335 Asbury Dr., Mandeville, LA 70448 on Friday, August 20, 2021 at 11:00 AM with visitation beginning at 10:00 AM. In lieu of flowers, donations can be made in Frank’s honor to the National Multiple Sclerosis Society, nationalmssociety.org/Donate; or St. Jude’s Children’s Hospital, stjude.org/donate. E. J. Fielding Funeral Home is in charge of the arrangements. Please Share a Memory on the Tribute Wall at www.ejfieldingfh.com.

Frank Hester, a 45-year resident of Mandeville passed away on August 13, 2021 at the age of 90. Frank was born on September 17, 1930 in Knightdale, North Carolina to William Frank Hester and Glady Blackstock Hester. Frank is survived by his... View Obituary & Service Information

The family of Frank Hester created this Life Tributes page to make it easy to share your memories.

Frank Hester, a 45-year resident of Mandeville passed away on...

Send flowers to the Hester family.