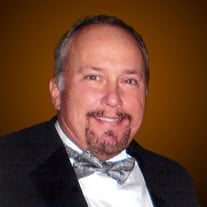 Elisha Baker Myers Wilson (Eli), age 59, of Covington, LA passed away on Saturday the 6th day of November, 2021. He was born on May 1st, 1962 in New Orleans, LA to Jack Myers Wilson, Sr. and Beverly Bordages Wilson. Eli is survived by his loving wife, Lyndell Maniscalco Wilson; his children, Karissa Leigh Wilson Sharp (Truman "Trip") and Cameron Myers Wilson; his grandchildren Jack Sharp and Levi Sharp; his brother Jack Myers Wilson, Jr. (Tina) and his sister Arby Wilson, his nephew Steve Wilson, and his great-niece Madison Coakley. He is also survived by his mother-in-law Linda Maniscalco, brothers-in-law Stephen Maniscalco (Jane) and Matt Maniscalco (Rachel) and many nieces, nephews and cousins. He also leaves behind too many friends to count. Eli is preceded in death by his father Jack Myers Wilson, Sr. (1997), his mother Beverly Bordages Wilson Bachman (2010), his stepfather Robert Lamar Bachman (2003), his nephew Ryan Michael Wilson (2006) his niece Gratia Myers Hemard (2015) and his father-in law Nicholas S. Maniscalco (2019). Eli was born a happy child in cloth diapers in uptown New Orleans. There, he attended St. Rita's School prior to relocating to Mandeville in the late 60's. After a short family relocation to Denver and then back to Mandeville, he attended Our Lady of the Lake. He attended St. Paul's School where his love for music, bass drum and bass guitar were nurtured by their band director, Roy Mouton. He was in the last graduating class of Holy Redeemer High School in Lacombe, LA in 1980. From there, he attended SLU, UNO and finally LSU where he began to seriously court the love of his life, Lyndell Maniscalco. The two had been inseparable since 1981. Eli enjoyed CB radio (Swamp Rabbit KCZ8865), and all things "amateur radio" having recently received his federal license KI5ADM. He spent most of his adult life as a semi-professional musician in the bands Country Spice, The Hats and Soul Revival. He was a board member for a time in the Original Krewe of Orpheus and current member of St. John Fools of Misrule where he reigned as Lord of Fools 2018. Eli worked a fulfilling 32 years in information technology in the banking, healthcare, and public service arenas. Notably, he worked for former St. Tammany Parish clerk of Court Malise Prieto, former Covington Mayor Mike Cooper, and current Mayor Mark Johnson. Eli delightfully retired from the Clerk’s office in 2018. In lieu of flowers, memorial contributions in memory of Eli may be made to St. Jude Children’s Research Hospital, www.stjude.org, and/or Alexander Milne Developmental Service, www.milneds.org. E. J. Fielding Funeral Home has been entrusted with the arrangements. The family invites you to share thoughts, fond memories, and condolences online at E.J. Fielding Funeral Home Guest Book at www.ejfieldingfh.com.

Elisha Baker Myers Wilson (Eli), age 59, of Covington, LA passed away on Saturday the 6th day of November, 2021. He was born on May 1st, 1962 in New Orleans, LA to Jack Myers Wilson, Sr. and Beverly Bordages Wilson. Eli is survived by his... View Obituary & Service Information

The family of Elisha Baker Myers Wilson created this Life Tributes page to make it easy to share your memories.

Send flowers to the Wilson family.