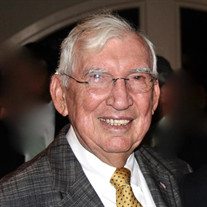 Edward Eugene (“Gene”) Miller joined the Lord on Sunday March 14, 2021, at the age of 94. Gene is survived by his wife of 67 years Mary LeMaire Miller, his sons Chip Miller and Rick Miller (Diana), his daughter Melanie Lewis (Jack), his ten grandchildren - Marley Morris (Milton), Chris Miller, Cristina Miller, Chance Miller (Meredith), Maggie Wilhelm (Stephen), Carrie Dunbar (Ross), Jonathan Lewis (Jen), Megan Meals (Cory), Emmy Miller, and Katie Miller, his six great grandchildren - Lucy Isabelle Morris, Brunson Morris, Mauldin Morris, Taylor Dunbar, Grey Lewis and Paige Lewis and a sister Harriet Henderson. In addition to being a loving husband, father, grandfather, and great grandfather and a dear friend to many, Gene was a veteran who bravely fought for his country in World War II, a servant leader at several churches, an accomplished petroleum engineer and petroleum geologist, a successful businessman, an exceptional golfer and a darn good dancer. Gene was born on June 18, 1926, in Conway, MO (population 200 at the time) to Samuel and Edna Miller. When Gene was three years old his father passed away and he was raised by his mother who never remarried. Throughout the period of Great Depression, Gene grew up on a family farm about 5 miles from Conway. He initially attended a one room schoolhouse and often said that he learned more than he would have in a larger school by paying attention to the teacher when she was teaching the older students in the classroom. His family, originally from what is now southwestern Germany, was one of the early Missouri settler families having traveled from North Carolina in 1797 to the then Spanish outpost of Cape Girardeau. As a boy, Gene loved roaming the Missouri countryside and reading countless Zane Grey novels while sitting next to a stream with his fishing pole. At age 13 Gene began caddying at a Springfield, MO country club often carrying two bags (earning 25 cents a bag) for 36 holes. This caddying experience in many respects kindled his lifelong passion for golf. Several of the older golfers at the club soon became fond of young Gene and he later described them as some of his earliest mentors and role models. In 1944, at age 18, Gene was drafted into the U.S. Army and assigned to the 21st Infantry Regiment, 24th Infantry (“Pineapple”) Division. During WW II, Gene served in the Pacific Theater as a lead scout in the jungles of the Philippines. And, following the end of hostilities, he served in Japan assisting with repatriation of Korean citizens who were forced into labor supporting Japan’s war efforts. In 1946, following his honorable discharge from the Army, Gene enrolled at Southwest Missouri State University, where he studied and played golf as a member of the golf team for two years. He then transferred to the University of Tulsa, where he again played on the golf team, began serious pursuit of an engineering degree and graduated in 1952 with a BS in Petroleum Engineering. Gene then worked for Shell Oil Company for seven years, during which time the company paid for additional education, giving him expertise in the field of Petroleum Geology. In 1960 he was recruited by internationally recognized geologist Dr. Gordon Atwater to join Atwater Consultants (an oil and gas consulting firm), where he worked for over 30 years, ultimately becoming the firm’s Co-Chairman. Gene married the love of his life, Mary, in 1953 and they lived in the New Orleans area for about 40 years. Gene and Mary then moved to The Woodlands, Texas, where they lived for 20 years. In 2016 they moved once again, this time to Christwood Retirement Community in Covington, Louisiana. Gene was an active member of numerous professional and social organizations including the Society of Professional Engineers, American Association of Petroleum Geologists, Society of Independent Professional Earth Scientists, American Arbitration Association, Order of St. Lazarus, Boston Club, and the New Orleans, Pensacola and Woodlands Country Clubs. Gene was very active in Church throughout his life and served in a number of leadership roles at various churches including St. Philip’s Episcopal Church (New Orleans), Christ Church Cathedral (New Orleans) and HopePointe Anglican Church (The Woodlands, Texas). He also served for six years as a member of the Standing Committee of the Episcopal Diocese of Louisiana. In his 80s Gene immersed himself in small group Bible studies, which he described as “the most thrilling and rewarding time of my life”. Gene’s love of golf and his prowess on the golf course cannot be overstated. He was a collegiate golfer, had a scratch handicap into his 40s, won numerous club championships and shot his age well into his 80s. Among Gene’s passions was relaxing with Mary, family and friends on the beach in Perdido Key, Florida, where Gene and Mary owned a vacation home for close to 30 years. Gene absolutely loved sunsets, surf fishing for pompano, checking crab traps on Old River and teaching many of his grandchildren how to swim and fish. Before passing away, Gene spent a number of months in Christwood’s Skilled Nursing Unit. Gene and Mary were blessed immeasurably by the care Gene received in this unit and by the extravagant love they both received from the staff and their many friends at Christwood during this challenging time. A memorial service for Gene is expected to be planned at a later date. The Miller family invites you to share thoughts, fond memories, and condolences online at E. J. Fielding Funeral Home Guest Book at www.ejfieldingfh.com.

The family of Edward Eugene " Gene" Miller created this Life Tributes page to make it easy to share your memories.

Send flowers to the Miller family.