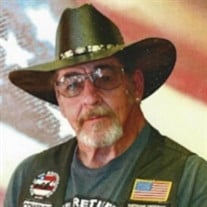 Edward Frederick “Cowboy” Lewis, Jr. passed away on September 5, 2021 in Covington, LA. He was born on January 26, 1953 in New Orleans, LA to the late Edward Frederick Lewis, Sr. and Bertha Irene Hatfield Lewis. Ed was the beloved husband of Margaret Dragon Lewis for 25 years. He was the loving father of Rebecca L. Landers (Terry), Edward J. Lewis, and Brian J. Lewis (Dominique). Ed was the proud grandfather of Jordan Landers, Jarin Landers, Jillian Landers, Easton Lewis, and Hayes Lewis. He was the brother of Patricia L. Shephard. Ed was a graduate of Gallia Academy High School in Gallipolis, OH. After high school, he enlisted in the United States Air Force and served in Vietnam. Ed entered the Air National Guard as a recruiter for four years. He was offered extended active duty and reentered the Air Force as a Military Training Instructor. He finished his military career as a TSgt. Ed was the founder of Ride of the Brotherhood – The Return and Camp NORA. He served as Vice Chairman of the Veteran and Military Affairs Advisory Council (VMAAC). Ed was the Chief of Staff and POW/MIA Chairperson for the VFW District 9. He was a member of the VFW Post 8290 Davis-Moran Memorial Post, American Legion, and St. John of the Cross Catholic Church in Lacombe, LA. Due to COVID-19, social distancing is encouraged and masks are required to attend services. Relatives and friends are invited to the Funeral Mass at E.J. Fielding Funeral Home, 2260 W. 21st Avenue, Covington, LA 70433 on Tuesday, September 14, 2021 at 11:00 AM. A WAKE will be held on Monday, September 13, 2021 from 5:00 PM until 9:00 PM at E.J. Fielding Funeral Home. Visitation on Tuesday will be from 9:00 AM until Mass time. Interment will follow the service at the Southeast Louisiana Veterans Cemetery, Slidell, LA. In lieu of flowers, donations may be made to Ride of the Brotherhood – Camp NORA, www.rideofthebrotherhood.org. Please Share a Memory on the Tribute Wall at www.ejfieldingfh.com.

The family of Edward Frederick "Cowboy" Lewis Jr. created this Life Tributes page to make it easy to share your memories.

Send flowers to the Lewis family.