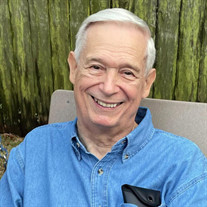 Edward Joseph Brewer Jr., age 75, of Lacombe passed away Friday morning, June 4, 2021 at his home with his family surrounding him. He was born on April 10, 1946 in New Orleans, Louisiana to Edward Brewer Sr. and Mary Louise Skinner Brewer. He is survived by his beloved wife of 47 years Carolyn Wagner Brewer, his loving children Stacey Brewer Hoffpauir (Jeremy), Sheri Brewer Alldredge (John), and Kevin Brewer (Jenna), and 5 grandchildren, Shane and Mattie Hoffpauir, and Kate, James, and Charlotte Alldredge. He is also survived by his brother-in-law Donald Wagner (Jeanne) and sister-in-law Debra Wagner, and a host of nieces and nephews. Edward is preceded in death by his parents Edward and Mary Louise Brewer. A native of New Orleans, a resident of Lacombe, Edward graduated in 1964 from Holy Cross High School, and he attended classes at the University of New Orleans. Edward was a devoted parishioner of St. John of the Cross Catholic Church for 20 years. Eddie was a kind and caring person who was well liked by all. He cherished spending time and making memories with his wife and family. His favorite vacations with his family were trips to Disney World and Gatlinburg, Tennessee. Most of all Eddie was a tried and true New Orleanian who loved crawfish boils, Saints games, and Mardi Gras. Relatives and friends are invited to attend a funeral mass at St. John of the Cross, 61030 Brier Lake Drive, Lacombe, Louisiana 70445 on Thursday, June 10, 2021 at 11:00 AM with visitation beginning at 10:30 AM. Interment will follow the services in St. Joseph Abbey Cemetery, 75376 River Road, St. Benedict, Louisiana 70457. In lieu of flowers, contributions in memory of Edward Brewer Jr. may be made to St. Jude Children’s Research Hospital. Donations may be either mailed to: ALSAC/St. Jude Children's Research Hospital 501 St. Jude Place, Memphis, TN 38105, or can be made at https://www.stjude.org. The family invites you to share thoughts, fond memories, and condolences online at E. J. Fielding Funeral Home Guest Book at www.ejfieldingfh.com.

Edward Joseph Brewer Jr., age 75, of Lacombe passed away Friday morning, June 4, 2021 at his home with his family surrounding him. He was born on April 10, 1946 in New Orleans, Louisiana to Edward Brewer Sr. and Mary Louise Skinner Brewer.... View Obituary & Service Information

The family of Edward Joseph Brewer Jr. created this Life Tributes page to make it easy to share your memories.

Send flowers to the Brewer family.