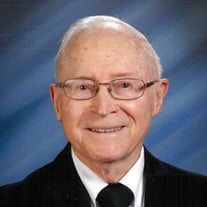 Brother Duane nee: Joseph James Gregory, was born on February 26, 1925, to the late Ignac John Gregory and Mary Virginia (Ripkowski) Gregory in New Waverly Texas. Brother is preceded in death by all his brothers and sisters, Edward Gregory, Marion Gregory (Stella), William Gregory (Frances), Hermon Gregory (Rita), Rosalee McCloskey, (Paul), Bernice Billiiot (George), Sadie Ulkie (Louis), Lucille Schmardl (Martin), Clara Machala (Stanley). Brother Duane is well remembered by numerous nieces and nephews as Uncle Joe. Prior to entering the brothers of the Christian Schools, Brother served time in the Military during World War II. He received a Victory Ribbon, 2 Overseas Service Bars, and a Large Button for ARS Score. Brother entered the Novitiate in 1960 and made final vows in 1966. Prior to entering Religious Life Brother Duane received a B.B.S. degree from the University of Houston, in Houston Texas in 1954. After spending some time in the Scholasticate (a college formation community) he was assigned to various schools in the legacy district (NOSF) St. Paul’s, Covington, on several occasions, De La Salle High School, New Orleans, LA, St. Michael’s High School, Santa Fe, New Mexico, Archbishop Rummel High School, Metairie LA, and De La Salle-Christian Brothers Lafayette, LA either as an accountant or bookkeeper. While at St. Paul’s (besides being an Accountant) he was also the moderator of the St. Paul’s Golf Team during his stay 1982-1986. He continued his love of golf through his active years. He enjoyed playing the Christian Brother’s Golf Tournament each year. Even after he retired, he kept practicing putting in the Brother’s House. He loved to watch Golf matches on Saturday and was a faithful follower of the different sports at St. Paul’s. Brother Duane was an avid gardener and while still in his younger days he cut the grass around the house and took pride in caring for the plants in the beautiful patio in the brother’s courtyard. Brother, ever a man of prayer had a great love of the Rosary and made a variety of prayer workshops, retreats, and pilgrimages. Brother Duane died very peacefully on October 15 at St. Tammany Hospital. The Brothers Community would like to thank the nurses, CNA’s, other staff members, the cooks, and Hospice for the gracious and loving care they gave to Brother Duane. A private funeral service will be held at a later date followed by inurnment in St. Joseph Abbey Cemetery. E. J. Fielding Funeral Home has been entrusted with the arrangements. Please share a memory on the tribute wall at www.ejfieldingfh.com.

The family of Bro. Duane Gregory FSC created this Life Tributes page to make it easy to share your memories.

Send flowers to the Gregory family.