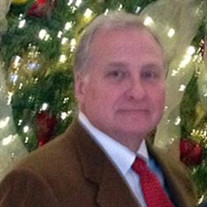 Dan J. Crossett passed away on Friday, November 6, 2020 at the age of 67. Mr. Crossett is survived by his wife, Patsy Paul Crossett; nephews, Lynn Crossett, Kenneth and Kerry Hudson; nieces, LeAnn Cook, Karen Hoffpauir, Karla Crossett and Kandy Crossett; He was preceded in death by his parents, Juanita Taylor Crossett and EricWelburn Crossett; one brother, E.W. “Buddy” Crossett; and one sister, Patricia Ann Cook. Dan worked for Medtronic, Inc. for 37 years retiring on June 1, 2013. He was a District Manager in Oklahoma from 1988 till 1994. He was a Sales Representative for many years in Little Rock, AR and Baton Rouge, LA. During his tenure with Medtronic he won the prestigious President Club Award. He graduated both from Central High and University of Arkansas at Little Rock. He took many educational training courses but was particularly proud of the NASPEXAM for Cardiac Pacing and Cardioversion Defibrillation for Non-Physicians. Dan was a devoted husband to his wife Patsy for 42 years. They enjoyed traveling, dining out and spending time with their friends. His passion was auto racing. He started racing at Hallett Motorsports in Oklahoma. Through the years he raced at several tracks around the country but in recent years he only raced at Hallett. He thought of his friends at Hallett as his extended family. It is his wish to have his ashes spread at the track where he can watch the sun set. He loved animals, especially dogs. His last dog, Ollie, was by his side all the time. Some neighbors knew him only as Ollie’s dad. Ollie was by his side when he passed. His family wishes to thank all of his friends for their kindness during his final weeks. Also, our thanks go out to the nurses and doctors at St. Tammany Hospital who gave him such good care as well as Passage Hospice. Relatives and friends are invited to celebrate Dan’s life at E.J. Fielding Funeral Home, 2260 W. 21st Avenue, Covington, LA 70433 on Thursday, November 12, 2020 at 5:00 PM with a gathering on Thursday beginning 3:00 PM. In lieu of flowers, the family requests donations in memory of Mr. Crossett to be made to the St. Tammany Humane Society, 20384 Harrison Ave., Covington, LA 70433 and St. Tammany Hospital Foundation, 1202 S. Tyler St., Covington, LA 70433. There will be a reception immediately following the memorial at the home of Patsy Crossett, 261 Arlington Alley West, Covington, La.

The family of Dan J. Crossett created this Life Tributes page to make it easy to share your memories.

Send flowers to the Crossett family.