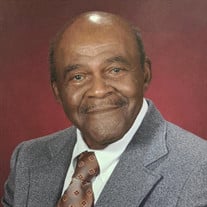 Clarence Joseph Inniss age 97, of Folsom passed away Tuesday evening, April 27, 2021 at his home. He was born on April 12, 1924 in New Orleans, Louisiana to Charles Inniss and Estelle Diggs Bogens Inniss. He is survived by children Clarence M. Inniss and spouse Linda, Cassandra Inniss McGeachy, Charles A. Inniss and spouse Diana, and Regina A. Inniss, former daughter in laws Leslie B. Inniss and Ardith A Inniss, Joan Denman and Grandchildren: Tasha Inniss, PhD, Enos Charles Inniss, PhD and spouse Lisa, Charles A Inniss, Jr. PhD, Judith Inniss Clermont and spouse Besnard, Stephen A Inniss, Amanda I. Beck and spouse Matthew, Christopher Inniss and spouse Lorena, Matthew Inniss, Conrad McGeachy and 8 Great-Grandchildren. He is also survived by a host of beloved nieces, nephews, and cousins and their children. Clarence is preceded in death by his loving wife Irma Josephine Melancon Inniss, and his son Arnold W. Inniss. Clarence proudly served in United States Army, and received the World War II Victory Medal. After being honorably discharged, Clarence earned his Bachelor Degree in Education from Dillard University. He continued his education at Harvard University earning his Master’s Degree. He served as an elementary school teacher with the New Orleans Public School System for 30 years. Clarence was a great leader and educator, well respected by all who knew him. He also worked in the community with Civil Rights groups, particularly on Voter Registration issues in the 1960’s and with the Urban Planning Commission in New Orleans. Clarence was a weekender at St. John the Baptist Catholic Church from 1977 -1986 before retiring to Folsom in 1986. He served as an Usher. He also volunteered for the parish fair, the work crews and served on the Pastoral Council and later on the Finance Committee of the Pastoral Council. Clarence was a member of the Knights of Columbus Council #10176. He was also a member of the VFW Ivan Huval Post 7286. Clarence enjoyed spending his time fishing, gardening, building, and helping others. He was always teaching in traditional and non- traditional ways. Ten of his children/ grandchildren are educators with an additional four having spent part of their careers in education. His true passion was his loving family whom he cherished deeply. Clarence was a kind, and caring person who will be missed deeply by all that knew him. Relatives and friends are invited to attend the Funeral Mass on Friday, May 7, 2021 at 11:00 a.m.at St. John the Baptist Catholic Church, 11345 St. John the Baptist Church Road, Folsom, Louisiana 70437. Interment will follow the services in New Orleans at Rest Haven Memorial Park. In lieu of flowers, contributions in memory of Clarence may be made to St. John the Baptist Church (memo Outreach Ministry). Donations may be either mailed to 11345 St. John Church Road Folsom, LA 70437, or can be made at the service. The Inniss family invites you to share thoughts, fond memories, and condolences online at E. J. Fielding Funeral Home Guest Book at www.ejfieldingfh.com.

Clarence Joseph Inniss age 97, of Folsom passed away Tuesday evening, April 27, 2021 at his home. He was born on April 12, 1924 in New Orleans, Louisiana to Charles Inniss and Estelle Diggs Bogens Inniss. He is survived by children Clarence... View Obituary & Service Information

The family of Clarence J Inniss created this Life Tributes page to make it easy to share your memories.

Send flowers to the Inniss family.