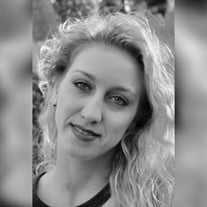 Charlene Marie Knieper, 48, passed away at her home on Monday, October 12, 2020. She’ll be remembered as a loving mother, grandmother, daughter, sister and friend, and also for making the best seafood gumbo of all the cooks in her family. Charlene was a longtime resident of Chalmette and New Orleans, and more recently, of Picayune, MS. Charlene worked in several jobs that she loved. The job that gave her the most pride, and that she was the most skilled in was being a bartender in the city of New Orleans for almost two decades. She loved New Orleans, especially the culture-rich French Quarter (where she was lovingly known as “Trina”) because it was filled with personalities as lively and interesting as she was. She attended the Academy of the Holy Angels, Delgado and Nunez Community Colleges. Charlene will be so missed by all who knew her. Her spirit was contagious and she was giving until the very end. Charlene is survived by her daughter, Caitlin Knieper Voebel and son-in-law Luke Voebel; son, Caleb Michael Knieper; mother, Connie Clause Constantine and stepfather, Russell Constantine; Father, Charles Knieper; grandchildren, Luke, Peyton and Grace Voebel; sister, Cherie Knieper Cody and brother-in-law Chuck Cody; nephews Patrick and Matthew Cody; as well as numerous aunts, uncles, cousins and many friends. She was preceded in death by her grandparents, Anna May and Wilbert Clause, and Iris and Henry Knieper. Relatives and friends are invited to the Memorial Service at E.J. Fielding Funeral Home, 2260 W. 21st Avenue, Covington, LA 70433 on Tuesday, October 27, 2020 at 3:00 PM with visitation from 1:00 PM until service time. A private inurnment will take place at a later date.

Charlene Marie Knieper, 48, passed away at her home on Monday, October 12, 2020. She&#8217;ll be remembered as a loving mother, grandmother, daughter, sister and friend, and also for making the best seafood gumbo of all the cooks in her family.... View Obituary & Service Information

The family of Charlene Marie Knieper created this Life Tributes page to make it easy to share your memories.

Charlene Marie Knieper, 48, passed away at her home on Monday,...

Send flowers to the Knieper family.