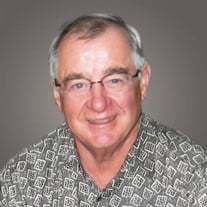 Carlos Joseph Indest, III went to his Eternal Rest on Monday, July 20, 2020, in Covington, LA. Born in New Orleans, Louisiana, on December 5, 1940. Married to and loving husband of Margaret “Peggy” Collura Indest for 53 years and the proud Father of Karl J. Indest (Lisa) and Jason A. Indest (Allison) and the Grandfather (Paw-Paw) of Dominic J. Indest, Samuel J. Indest, and Alexander W. Indest. Son of Carlos J. Indest, Jr. and Edna Louise Abadie, both deceased, and the Maternal Grandson of Annie Cauenberg Abadie, also deceased. Attended Holy Cross School from 7th through the 12th grade and graduated in 1958. Joined the United States Navy after graduation and served on active duty for three years. While in the Navy, Carlos qualified for a Regular NROTC Scholarship under which he attended Tulane University. Upon graduation, he accepted a commission in the United States Marine Corps and served for four years which included a tour in Viet Nam where he was awarded a Purple Heart and other decorations. After leaving the Marine Corps in 1969, Carlos joined Texaco Inc. where he worked in the Land Department in various capacities for twenty-five years before retiring. He eventually moved to Tchefuncta Club Estates (TCE) in Covington, Louisiana. He served on the TCE Board for three years and as the Big “B” for the ROB’s, affectionately known as the Retired Old Bastards. Carlos enjoyed working in his yard and garden, playing golf, and the greatest pleasure in his life was being with his wonderful wife, his two sons, and his three grandchildren. Relatives and friends are invited to the Funeral Mass at St. Anselm Catholic Church, 306 St Mary St, Madisonville, LA 70447 on Friday, July 24, 2020 at 11:00 AM with visitation from 9:00 AM until Mass time. Interment will follow the service at Pinecrest Memorial Gardens, Covington, LA. Please Share a Memory on the Tribute Wall at www.ejfieldingfh.com.

The family of Carlos Joseph Indest III created this Life Tributes page to make it easy to share your memories.

Send flowers to the Indest family.