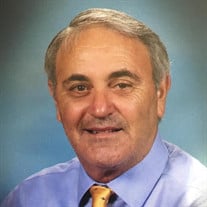 Brian Paul Logarbo, Sr. passed away on Monday, March 15, 2021 in Covington, LA. He was born on January 20, 1958 in Baton Rouge, LA to the late Russell Joseph Logarbo and Ouida Mae Dupuy Logarbo. Brian was the beloved husband of Dr. Ann Kay Cefalu Logarbo of Amite, LA for 35 years. He was the loving father of Brian Paul Logarbo, Jr., Joseph Nicholas Logarbo, and Patrick James Logarbo. Brian was the brother of Mona Logarbo and Nancy Logarbo Brooks (Larry).He is survived by the above, as well as legions of loving relatives. Brian graduated from Redemptorist High School in Baton Rouge in 1977 where he was a 2-year varsity letterman in Track and Field and a member of the Key Club. He graduated with undergraduate degrees from Louisiana State University and Southeastern Louisiana University in General Studies and Finance, respectively. He then went on to earn his MBA from Southeastern following his tenure as a manager at American Bank. Though Brian experienced marked success in banking and finance as a younger man, he later in life found his true vocation as an educator and coach. Brian was a Teacher at St. Paul’s School in Covington, LA for the past 19 years where he coached soccer, track and field, and founded the school’s Economics, Finance, and Entrepreneurship program. He loved his students as if they were his own sons and took extraordinary pride in their accomplishments both during high school and beyond, into their adult lives. His greatest enjoyments in life were traveling, educating, coaching, and spending time with his wife and sons, whom he cherished. To those that knew Brian, he will be fondly remembered as a man of exemplary character, devout husband, and, especially to his sons and students, a father. Relatives and friends are invited to the Funeral Mass at St. Peter Catholic Church, 125 E. 19th Avenue, Covington, LA 70433 on Friday, March 19, 2021 at 12:00 Noon with visitation from 10:00 AM until Mass time. Interment will follow the service at St. Joseph Abbey Cemetery, St. Benedict, LA. In lieu of flowers, the family invites you for to make a small donation to Pennies for Bread. Please Share a Memory on the Tribute Wall at www.ejfieldingfh.com.

The family of Brian Paul Logarbo Sr. created this Life Tributes page to make it easy to share your memories.

Send flowers to the Logarbo family.