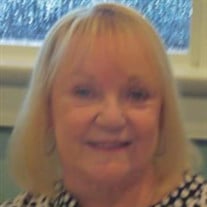 Barbara “Bobbi” Henderson Schee entered into eternal rest at her home in Covington, Louisiana on Wednesday, March 24, 2021. Beloved wife of the late William Robert “Bill” Schee for 20 years. Preceded in death by her parents Frederick Lee Henderson & Gladys Betz Henderson as well as her loving mother-in-law, Eleanor Hall Schee. She is survived by 2 step-sons Matthew Schee and Bret Schee (Jennifer), 3 step-grandchildren Avery, Reagan & Lyla Schee, and brother-in-law Dan Schee (Stephanie). Bobbi was like a “mother” to Stacy Kaiser Davis (Jeremiah) since Stacy was born and proud “aunt” to Stacy and Jeremiah’s children, Connor & Caleb Davis. She is also survived by her cousins, Wendy Betz Songy (Paul “Red”) and George W “Bill” Betz Sr., as well as other loving relatives and friends. Bobbi surrounded herself with very dear friends who she considered her extended family throughout her life. Bobbi leaves behind her kitty companion, Scampy, who she gave the best of love & care during their 18 years together. Scampy continues to receive loving care with one of Bobbi’s dear friends. Bobbi was born on November 4, 1945 in New Orleans, Louisiana. She was a native of Metairie, Louisiana and a graduate of East Jefferson High School. Bobbi served the local Real Estate industry most of her adult life as a successful Realtor then a Mortgage Broker retiring 5 years ago from Gulf Coast Bank. Bobbi enjoyed the beach, cooking, reading and traveling including her RV travels with Bill. She also loved the local music festivals, especially the French Quarter Fest and the Jazz Fest which she attended with her close friends for many years. Bobbi and Bill had many wonderful adventures while traveling including attending NASCAR events and her cherished memories of their many Key West Trips. A Celebration of Life will be held at a future date. Those wishing to honor Bobbi’s memory, donations may be made in her name to The Northshore Humane Society, 20384 Harrison Avenue, Covington, Louisiana 70433. Arrangements have been entrusted to E.J. Fielding Funeral Home. Please Share a Memory on the Tribute Wall at www.ejfieldingfh.com.

The family of Barbara "Bobbi" Henderson Schee created this Life Tributes page to make it easy to share your memories.

Send flowers to the Schee family.