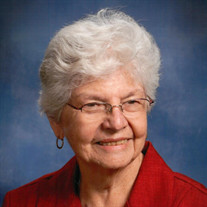 Barbara “Bebe” Welton Stich, born June 5, 1931 at Schumput Hospital in Shreveport, LA to Herbert Lee Welton and Helen Mae Gainey Welton. She was the devoted wife of the late William Philip Stich, Jr. for 56 years until his death in 2009. She is survived by her Daughters - Brenda S. Spiker, Ruth S. Sandier, Judith M. Stich, Son - Paul D. Stich, 8 Grandchildren: Sean, Brandi, Bill, Jessica (Matt), Elizabeth, Alexis, Steven and Rebekah. She also has 9 great-grandchildren with another on the way. Bebe lived and grew up in Shreveport. She resided in Metairie for 31 years and was a resident of Bush/Covington since 1984. She had one older brother, Harold David. She went to Werner Park Elementary School and continued on to Fair Park High School. She graduated and continued on to Texas Lutheran College in Seguin, Texas. After two years at Texas Lutheran College she transferred to Centenary College in Shreveport. Bebe was an active member of First Lutheran Church in Shreveport. As she grew older she taught children in Sunday School Class. She was active in the youth’s Luther League. The Luther League from First Lutheran Church in Shreveport and Grace Church in New Orleans would get together at times. This was how she met her future husband, Bill. She was an active member of Grace Lutheran Church in New Orleans, LA after moving to Metairie after marriage. She was secretary at Grace for 2 years. She was called to teach 3rd Graders at Our Savior Lutheran School in New Orleans for 16 years. She was Parish Secretary at Atonement Lutheran Church in Metairie for 9 years. After moving to the North Shore she served as secretary at Holy Trinity Lutheran Church in Covington for 9 years. She was a Charter Member of Hosanna Lutheran Church where she was the Pastor’s Assistant since 1998 – 2013, at which time she retired. She was the founder of the Quilting group at Hosanna where they make quilts and other items to distribute to many missions, here and abroad, for babies, young people and adults in need. She remained an active member and volunteer at Hosanna until her death. She will always be remembered by most as the one with the smile and greeting, making them feel welcome at Hosanna. She was a devoted and active volunteer at Gran’s Attic Thrift Shoppe, a program of the Samaritan Center. Because of the current situation with Covid-19, the family has elected not to have any services at this time. In lieu of flowers donations may be made to The Samaritan Center, 402 Girod St., Mandeville, LA 70448 (samcen.org/donate.html) or the Quilters group or the preschool at Hosanna Lutheran Church, 2480 Hwy 190 Mandeville, LA 70448. Share a memory on the tribute wall at www.ejfieldingfh.com

The family of Barbara "Bebe" Welton Stich created this Life Tributes page to make it easy to share your memories.

Send flowers to the Stich family.