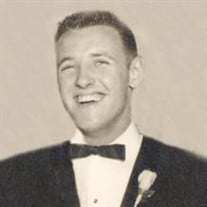 Auguste Birchmont "A.B." Zimmermann, Jr., age 76, of Winston, GA, passed away on Tuesday, July 21, 2020. Because of the pandemic, his family waited until this year to have his memorial service so that his loved ones and friends could gather safely. A.B. was born on August 10, 1943, in New Orleans, LA, to the late Auguste Birchmont Zimmermann, Sr. and the late Inez Brady Zimmermann. A.B. served in the Army National Guard. He was a long-term resident of New Orleans and Folsom until 1986, when he moved to Atlanta, GA. A gifted carpenter, he owned and operated Zimmermann Contracting, LLC. He was well-respected and liked by his clients. So much so that his extensive client base was essentially the result of referrals. A.B. had two primary love languages: sports and cooking. His love for cooking started at an early age where he would stand at his mother's side, learning how to show love through food from a gifted cook. Always a big fan of football, A.B. became an unwavering fan of the New Orleans Saints when he had season tickets to their inaugural season. He was also a fan of the LSU Tigers and the Atlanta Braves. He could often be found in his kitchen equipped with a TV cooking a masterpiece while yelling at the TV. A.B. is survived by his wife, Merry Cagle of Winston, GA, two daughters and sons-in-law; Heather (Tim) Gianndrea of Covington, LA and Gretl (Corey) Class of Cody, Wyoming, as well as seven grandchildren to whom he was "Poppy" - Olivia Catherine, Hayden Christian, Greer Elizabeth, and Aubrey Jane Gianndrea, and Logan George, Bridger Michael and Sawyer Matthew Class. He is also survived by his brother, Dean Zimmermann, of Virginia Beach, VA, and sister, Alyson (Tim) DeFisher. A.B. was preceded in death by two daughters, Mary and Heidi Zimmermann. In lieu of flowers donations can be made to the Northshore Food Bank. https://northshorefoodbank.org/donate-funds Relatives and friends are invited to attend the graveside services at Pinecrest Memorial Gardens Mausoleum, 2280 W. 21st Avenue, Covington, LA 70433 on Saturday June 12, 2021 at 11:00 AM. A reception will follow the services. E.J. Fielding Funeral Home is in charge of arrangements. Please sign the E.J. Fielding Funeral Home online Guest Book at www.ejfieldingfh.com.

Auguste Birchmont "A.B." Zimmermann, Jr., age 76, of Winston, GA, passed away on Tuesday, July 21, 2020. Because of the pandemic, his family waited until this year to have his memorial service so that his loved ones and friends could gather... View Obituary & Service Information

The family of Auguste Birchmont "A.B." Zimmermann created this Life Tributes page to make it easy to share your memories.

Send flowers to the Zimmermann family.