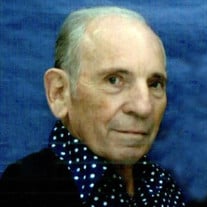 Arthur Joseph Blanchat passed away on Saturday August 7, 2021 at the age of 94. He was born in Runnymede, Kansas on December 4, 1926. He was one of seven children born to Arthur L Blanchat and Mary C Fitzpatrick Blanchat. He was the loving father of Mary B. Manuel (Paul), Thomas Blanchat, Phd (Martha), Stephen Blanchat (Stephanie) and Alison B. Accardo (Robert). He was the grandfather of six, Chase Manuel (Anne), Robert Accardo, Jr, Natalee Blanchat, Etienne Blanchat, Henri Blanchat and Antoine Blanchat; and great-grandfather of two, Kennedy Manuel and Connor Manuel. Arthur is also survived by many nieces and nephews. Arthur was preceded in death by his first wife, Anne Roach Blanchat in 1959, his beloved wife of 60 years, Dolores Ceceil Montecino Blanchat in 2020, and his parents Arthur Blanchat and Mary Catherine Fitzpatrick. In 1944, he enlisted in the Army Air Corp and served in the South Pacific until honorably discharged in 1946. Following his discharge he enrolled in Kansas State University and graduated with a degree in Business Administration. Upon graduation he was offered a position in the group department of Washington National Insurance Company. After thirty years, he retired as Regional Group Manager. Following his retirement from Washington National, he and others formed Associated Health Plans (AHP), in which he was the CEO and Major Stock Holder. AHP, at the time of his retirement and sale was one of the largest Third Party Administrators in the South. Due to COVID-19, social distancing is encouraged and masks are required to attend services. Relatives and friends are invited to attend the Funeral Mass at St. Benedict Catholic Church 20370 Smith Road Covington, LA 70435 on Thursday August 12, 2021 at 10:00 AM with visitation beginning at 9:00 AM. Interment will follow in Hook and Ladder Cemetery, 1000 Lafayette St. Gretna, LA 70053. In lieu of flowers, the family request donations in memory of Mr. Blanchat to be made to St. Joseph Abbey. E.J. Fielding Funeral Home is in charge of arrangements. Please sign the E.J. Fielding Funeral Home online Guest Book at www.ejfieldingfh.com.

Arthur Joseph Blanchat passed away on Saturday August 7, 2021 at the age of 94. He was born in Runnymede, Kansas on December 4, 1926. He was one of seven children born to Arthur L Blanchat and Mary C Fitzpatrick Blanchat. He was the loving... View Obituary & Service Information

The family of Arthur Joseph Blanchat created this Life Tributes page to make it easy to share your memories.

Send flowers to the Blanchat family.