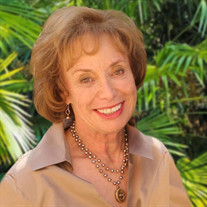 Anita Goodman Barfield entered into eternal rest on Tuesday, May 17, 2022, surrounded by her loving family. She was born on August 16, 1938, in New Albany, Indiana to Ferdinand and Catherine Goodman. At a young age her family moved to Baton Rouge where Anita graduated from Redemptorist High School and attended LSU where she met the love of her life, Bill Barfield. Anita graduated from LSU with a Bachelor of Science and upon graduation, Bill and Anita were married at Our Lady of Mercy Catholic Church in Baton Rouge on August 4, 1962. They moved to New Orleans while Bill was finishing LSU Medical School and Anita taught Science at Isidore Newman School. During that time, she gave birth to their first child, Wendy. Bill was commissioned as a Captain in the United States Air Force and the family relocated to Eglin Air Force Base in Fort Walton, Florida where their second child Scott was born. After Bill completed military service, the family moved to Dallas for his residency at Parkland Hospital. Anita and Bill made the decision to return Louisiana and lived in Metairie for a short time and their third child Sam was born. In 1973 they moved to Covington where their last child Derrek was born. Anita and Bill loved Covington and have lived there for the past forty-nine years. Anita energetically gave to the community in many ways, including serving the Junior League, the Covington Food Bank, and other charities in the Covington community. She also built and managed a low-income housing complex. In addition to teaching, her varied careers included office manager, cattle rancher, tour guide, Elderhostel educational travel guide, and serving as a docent at the National WW II Museum in New Orleans. Anita was passionate about her husband, children and grandchildren and made her home a welcoming place for all who visited. Many of her children's friends came to refer to Anita as their “other mother”. She treasured her time with her sister, Linda, and enjoyed her outings with her Girl's Group. She was devoted to her Catholic faith and to the many priests, brothers and nuns in the Covington area. Anita is survived by her husband of 59 years, Bill Barfield, daughter, Wendy Chiles and her husband Bill, sons Scott Barfield, Sam Barfield and his wife Darby, Derrek Barfield and his wife Pamby, and her sister, Linda Young. Her grandchildren include Ashley Chiles, Brett Chiles and his wife Laura, Clay Chiles, Brayden Chiles Keenan and her husband Ted, Alexandra Fisher McLean and her husband Carson, Ivy Alabastro, Gabe Barfield, Avery Barfield, Sara Barfield, Charlotte Barfield, and Liam Barfield. She had six great grandchildren, Turner Chiles, Maggie Chiles, Parker Chiles, James Keenan, Gordon Alabastro, and Clay Keenan. The family would like to thank the medical staff and especially her devoted and loving caretakers at Christwood Retirement Community. Friends are cordially invited to a visitation with the family on Sunday, May 22nd from 4:00 - 6:00 pm at E.J. Fielding Funeral Home, 2260 West 21st Avenue, Covington, LA 70433. The funeral will be held on Monday, May 23rd at 1:00 pm at Saint Joseph Abbey, 75376 River Road, Covington, LA 70457. Following the service, a reception will be held at the Saint Joseph Abbey Retreat Center. In lieu of flowers, contributions can be made in Anita’s memory to: Saint Joseph Abbey, 75376 River Road, Covington LA, 7045, Discalced Carmelite Nuns, 73530 River Road, Covington, LA 70435, and the Teresian Sisters Covent, 18104 Saint Joseph's Way, Covington, LA 70435.

Anita Goodman Barfield entered into eternal rest on Tuesday, May 17, 2022, surrounded by her loving family. She was born on August 16, 1938, in New Albany, Indiana to Ferdinand and Catherine Goodman. At a young age her family moved to Baton... View Obituary & Service Information

The family of Anita Goodman Barfield created this Life Tributes page to make it easy to share your memories.

Send flowers to the Barfield family.