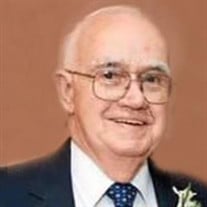 Alvin Burton Gibson, age 94 of Covington, LA, entered eternal rest peacefully on Saturday, April, 2, 2022. He was born in Ponchatoula, LA on August 27, 1927 to Charles D. Gibson and Annie Davis Gibson. Alvin is survived by his beloved wife of 71 years, Laura Pusey Gibson, and his beloved children, Barbara Gibson Dragg, Ellen Gibson Landry, and Daniel Gibson. He is also survived by 5 grandchildren, and 9 great grandchildren. Alvin is preceded in death by his parents and brothers, Charles Davis Gibson and George Cinclair Gibson. Alvin was a native of Ponchatoula, LA and longtime resident of Covington, LA for over 54 years. He graduated from LSU then LSU Law School. At LSU he was a member of Kappa Sigma fraternity and was inducted into the national leadership honor society Omicron Delta Kappa. At LSU Law School he won the Moot Court Competition, was an editor of the Law Review, and achieved membership in the honorary legal scholastic society the Order of the Coif. He was later inducted into the LSU Paul M. Hebert Law Center Hall of Fame in recognition of his accomplishments and contributions as a law student and practicing attorney. After graduation from law school in 1949 he began a distinguished career as an attorney for over 40 years, first in private practice in Ponchatoula and then as a corporate attorney with Shell Oil Company in New Orleans and Houston. He retired from Shell in 1985 having attained the position of Assistant General Counsel and continued to practice law for several years as a consultant and counselor to both corporate and private clients. Alvin was family centered, loving, kind, wise, humble, generous, faithful, and loyal. His true passions were spending time with his family and LSU football. Alvin was unique, well respected and liked, and will be deeply and dearly missed by all who knew and loved him. Relatives and friends are invited to the Funeral Mass at St. Anselm Catholic Church, 306 St. Mary Street, Madisonville, LA on Friday, April 8, 2022, at 11:00 AM preceded by a eulogy at 10:45. Interment will follow the service at Theodore Dendinger Cemetery, Madisonville, LA. The family would like to thank the companions and staff at Christwood Retirement Community who helped us care for Dad over his final years. E.J. Fielding Funeral Home locally owned and operated, (985) 892-9222 has been entrusted with funeral arrangements. The family invites you to share thoughts, fondest memories, and condolences online at E. J. Fielding Funeral Home Guest Book at www.ejfieldingfh.com. In lieu of flowers the family asks that memorial donations be made to Manresa retreat center in Convent, LA, and St. Anselm Church.

The family of Alvin Burton Gibson created this Life Tributes page to make it easy to share your memories.

Send flowers to the Gibson family.