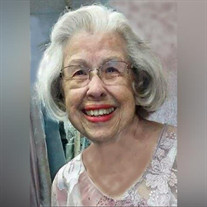 Alice Marguerite "Peggy" Meyer Horchoff of Abita Springs, LA passed peacefully from this world on the morning of February 13, 2021, after a long life well lived. Peggy was born to Alice Casteix Meyer and J. Ben Meyer Sr. on February 9, 1925 in her aunt's home on Orleans Avenue in New Orleans and grew up in Plaquemines Parish. Peggy slept in the same bed that she was born in until she entered Hospice care shortly before her death. Peggy graduated from high school in 1941 at the age of sixteen and enrolled at St. Mary’s Dominican College in New Orleans that same year. Her college education was interrupted for two years when she withdrew to work as a wartime aircraft lofter; she graduated from Loyola University in New Orleans in the spring of 1947 with a Bachelor of Science degree. She met Louis Horchoff at the ping pong table in a USO Club in New Orleans the following year, and they were married at St. Rose de Lima Church in New Orleans in August 1950. Peggy was an Air Force wife and moved her family nearly a dozen times as her husband’s station assignments took them to Greece, to Panama, and throughout the southern United States. She will be remembered for 30 years of teaching in Orleans Parish public schools, being a catechist and Eucharistic Minister at St. Jane de Chantal Church in Abita Springs and Holy Rosary Church in New Orleans, riding an elephant at the age of 79, skydiving at the age of 80, and her extensive travels to five (or possibly six) different continents and more countries than one has fingers and toes. With all of this, Peggy still considered her greatest accomplishment to be that of rearing and nurturing her children who called her WOW, their children who called her Maman, and their children who also called her Maman. She was a loving wife, mother, grandmother, and great-grandmother, and is survived by her six children and their spouses - Dennis (Maria Radosta), Patrick (Cindy Horchoff), Jeff, Meg (Andre` Bouvier), Jean (Paul Brawley), Sean - and by the outlaws Gwen and Debbie. She is also survived by 8 grandchildren and 2 great-granddaughters, and by a host of loving cousins, nieces, nephews, and friends. She is preceded in death by her husband of 45 years Louis Horchoff (Pop), mother Alice C. Meyer, father J. Ben Meyer Sr, brothers J. Ben Meyer Jr., Richard (Dick) Meyer, Jean C. Meyer, and sister Mary Lou Varnado. Relatives and friends are invited to attend the Mass of Christian Burial on Thursday February 18, 2021, 11:00am, at St Jane de Chantal Catholic Church 72040 Maple St. Abita Springs, LA 70420. Visitation will be at the church beginning at 9:00am until service time. Due to COVID-19, social distancing is encouraged, and masks are required to attend the visitation or Mass. Interment will be private in The Biloxi National Cemetery in Biloxi MS. In lieu of flowers, please consider making a donation to St Joseph Abbey, 75376 River Road, St. Benedict, LA 70457, to St Jane de Chantal Church, or to a charity of your choice. E.J. Fielding Funeral Home is in charge of arrangements. Please sign the E.J. Fielding Funeral Home online Guest Book at www.ejfieldingfh.com.

The family of Alice Marguerite Meyer Horchoff created this Life Tributes page to make it easy to share your memories.

Send flowers to the Horchoff family.