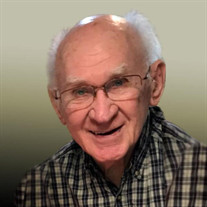 Alert Gordon Bauer went to be with the Lord on May 10, 2021. He will be greatly missed by all those who knew this humble, gracious and giving husband, dad, dad-in-law, Grampa, G-G pa and friend. He was born in Zeeland, North Dakota on April 20, 1927. He was raised on the family farm outside of Zeeland, N. Dakota and of course being as such, he and the other siblings were all part of making that farm vibrant. The North Dakota winters are very harsh and he had many entertaining stories of those winters and the ways to overcome those hardships. He was a WW2 Veteran, as well as a Korean war Veteran. Uncle Sam drafted him for the Pacific Theater in WW2, that war ended soon after his drafting and he was several months shy of full duty term in WW2. Then came the Korean war, so Uncle Sam again called on him to go serve, which he did and survived it as well. After the tours of duty for Uncle Sam, he went on to graduate from the University of North Dakota in Geology/Geophysics. Gordon met his bride to be and they were married on June 6, 1954. While working in the oil field and relocating across the USA for Shell Oil, Carter Oil, Humble Oil, and ESSO as a Geophysicist, he advanced to become Senior Geophysicist of S.E. Louisiana with Exxon. Moving from Rapid City, S.Dakota to Kemmerer, Wyoming to Cut Bank Montana to Durango, Colorado to Lafayette, Louisiana to New Orleans, Louisiana to Mandeville, Louisiana. They loved south Louisiana for the fact that the winters are much easier than those in the Northern states, so they settled here to retire. He was a Scottish Rite Mason and an avid Jerusalem Temple Shriner He loved playing the saxophone in their bands and performing at the annual Shrine circus. He was a lover of life and all things good and shared this love with others, always volunteering to help family and in the community. He liked to fish, garden, create stained glass art as well as provide for others and generally just enjoyed life as a gift from God. Gordon is preceded in death by his beloved wife, Nancy Faye Stakke, his parents, Christine and Gerhart Bauer, his brother, Harold (Shirley) and sister Gert (Al). Gordon, is survived by his three children, Steven Todd (Kyle), Trudy Margaret Bauer-Martinez (John) and Andrew Jay. He is also survived by his five grandchildren Jessie Harwood (Heath), Heidi Renner (Scott) Seth Bauer-Martinez, Chase Bauer-Martinez, Grace Bauer-Martinez and four Great-Grandchildren, Sam, Mills, Rodi and Drake. Gordon is also survived by his brother, Donald (Sandy) of N.D. and sister, Darlene of CA. The family will observe a private Memorial Service at St.Timothy United Methodist Church Memorial Garden in Mandeville, LA on Saturday, May 15, 2021. Please share a memory on the Tribute Wall atwww.ejfieldingfh.com

Alert Gordon Bauer went to be with the Lord on May 10, 2021. He will be greatly missed by all those who knew this humble, gracious and giving husband, dad, dad-in-law, Grampa, G-G pa and friend. He was born in Zeeland, North Dakota on April... View Obituary & Service Information

The family of Alert Gordon Bauer created this Life Tributes page to make it easy to share your memories.

Send flowers to the Bauer family.