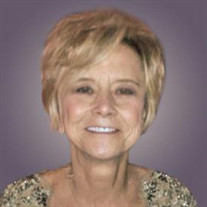 Let us tell you about our precious angel in heaven. On March the 5th, 1958, a beautiful little girl was born in New Orleans, Louisiana. Her proud parents, Gloria Marie Hebard and Maurice Louis Rouen, aka “Bucky”, named her Adrienne Marie. From the beginning, Adrienne was a unique child. She was the youngest of four children…brother Maurice, aka “Rip”, sister Gloria, aka “Totsy”, and sister Marlene, aka “Moo Moo”. Obviously, Gloria and Bucky had a passion for giving their kids creative nicknames and Adrienne would be adorned with the mother of all of the unique names...“Stinkey!” As a young girl, Adrienne attended St. Rose de Lima elementary school. When she was only 4 years old she lost her dad to a kidney failure. Four years later, her mom was introduced to a very special Italian man, Martin Scaffidi, on a blind date for the LSU/Tulane football game. One year later, Martin and Gloria were married and the Scaffidi/Rouen families were brought together with the addition of Martin’s two children, 11 year old Steve, and 8 year old Mike. Less than two years later, Gloria and Martin had a baby girl, Marla, and now the family had grown to 7 kids! Adrienne, attended Lake Castle Private School while living on Broad Street behind the Hebard Jewelry Store, and later for a brief time in New Orleans East. In 1968, Adrienne and her new family moved to a huge home way off the beaten path in Kenner, LA during the suburban boom of the 1970’s. Adrienne had always been popular and it didn’t take her long to make new friends as she attended St. Jerome, Roosevelt Jr. High, and later graduated from Grace King High School in 1977. Her longtime best friend, Susan Magner Basso, could tell you that Adrienne never met a stranger and was always the life of the party. Family was everything to Adrienne, and she truly had a passion for life. She enjoyed fishing, cooking, entertaining, and traveling to foreign places like Australia, New Zeland, Japan, and China. She especially loved her trip to Rouen, France. Adrienne was a huge Who Dat fan and even made it to national TV when she was featured in a shot during the Saints’ Super Bowl victory in Miami. She was a fitness enthusiast and often ran in the Crescent City Classic among other competitions. Some of her fondest memories were during her Thanksgiving trips to NYC and her annual family beach vacations to Florida where she would spin stories with family and friends over a roaring campfire and a few cocktails. Adrienne was a huge music fan and collected hundreds of records and CDs. Her favorite artists were Bryan Adams, Tower of Power, and Hall and Oats. She also loved films, especially really cheesy Hallmark Christmas movies. And who could forget Adrienne’s greeting cards? Not a holiday, birthday, or special occasion went by without getting a card from Adrienne. Christmas was her favorite time of year where she would gather with her family and display her famous Nutcracker collection and hand out countless gifts to all of the kids. Over the years, Adrienne would make an impact in her Northshore community in Covington, LA. She was an astute business woman and entrepreneur who ran several local companies in a variety of fields. She was also active in the community and was the Queen of Mandeville’s Krewe of Orpheus parade. During the last few years of her life, Adrienne suffered from kidney failure and her health rapidly declined. She eventually was paralyzed from the neck down and needed round the clock assistance. During this tough time, Adrienne formed a special bond with her sitters who were with her day and night, tending to her every need. These special ladies, Bretta, Juanita, Sandra, Tina, and Val not only cared for Adrienne, but they loved her and unselfishly gave of themselves to take care of her. For close to 2 years, Adrienne was bedridden but she never lost her fun-loving spirit that she was known for. Everyone that met her would say that Adrienne was a fighter who never gave up. She was always high on life, even when times looked bleak. Her will to live was amazing and she was an inspiration to everyone, especially her nieces and nephews who she treated like her own kids. Adrienne was a prankster for sure, and enjoyed making people laugh. She loved playing practical jokes on family and friends, even during her last days, and her mind was sharp to the end. She had a remarkable talent for remembering names, dates, and many details that would amaze everyone. Adrienne’s trademark was her unforgettable slogan that only she could deliver in her comical, sarcastic way, “Ehhh, Ehhh, Ehhh!” Adrienne will be greatly missed by all of her brothers and sisters: Rip Rouen (Debbie), Gloria Rouen Philburn (Barry), Marlene Rouen, Steven Scaffidi (Ana), Michael Scaffidi, Marla Scaffidi Pike (Bobby). Nieces and Nephews: Jennifer Philburn Billiot (Brad), Christina Philburn Bradford (William), Ashely Rouen, River Rouen (Joelle), Miles Rouen, Steven Scaffidi (Christie), Nia Scaffidi Mathews (Edwin), Gabriela Scaffidi (Boyd), Blake Pike (Laurie), Brandon Pike (Alyssa), Brett Pike. Great nieces and nephews: Hunter, Brynlee, Avery, Adeline, Aubrie, Penelope, Cecilia. Aunts: Ida Hebard Eigher, Faye Hebard Stouder All funeral services will be private. In lieu of flowers, the family requests donations in memory of Adrienne to be made to the National Kidney Foundation www.kidney.org .

Let us tell you about our precious angel in heaven. On March the 5th, 1958, a beautiful little girl was born in New Orleans, Louisiana. Her proud parents, Gloria Marie Hebard and Maurice Louis Rouen, aka &#8220;Bucky&#8221;, named her Adrienne... View Obituary & Service Information

The family of Adrienne Marie Rouen Rovira created this Life Tributes page to make it easy to share your memories.

Let us tell you about our precious angel in heaven.

Send flowers to the Rovira family.